The Royal Mint has created a £5,000 coin that is worth far more than its face value. The five kilogram coin is estimated to be worth approximately £300,000. 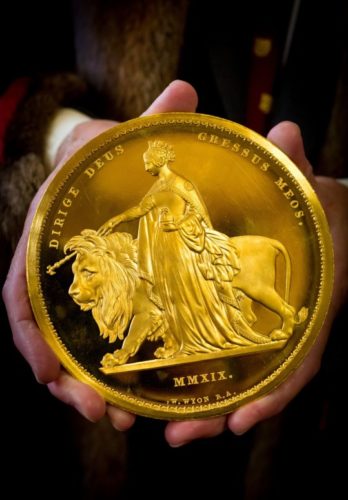 The coin is made of the finest 999 gold and has been remade from a die that was first used nearly 200 years ago. This is not the only traditional aspect to the coin. The coin has been made so that the quality of its gold may be tested in a trial named The Trial of the Pyx. This trial is the official quality testing process that is performed on coins produced by the Royal Mint. The trial dates back to 1248, making it one of Britain’s oldest judicial practices.

Jurors in the trial pick out some coins from a selection that are held in Pyx boxes – hence the name of the ceremony – and these coins are sent to be tested by the Goldsmith’s Company’s Assay Office Laboratory and the National Measurement Office.

Despite there being no legal ramifications for the compromised integrity of the coins, the ceremony is still performed due to the practice being something on which the Goldsmith’s Company prides itself. On the relevance of the trial in modern society, Simon Hutchinson, The Goldsmith’s Company’s Deputy Clerk noted that “[f]or as long as we place value in coins, the Trial will remain relevant in modern life”.

There are four of the £5,000 coins, and one £2,000 coin that has been made with an identical design. This design is that of “Una and The Lion”, a design that was created by a former chief engraver at the Royal Mint, William Wyon. Wyon is also noted for his coin portraits of Queen Victoria in the 19th century.

Three of the four £5,000 coins have been sent to the Goldsmith’s Company to participate in The Trial of the Pyx, where they will be drilled into and melted down to ensure that the gold is of the quality. As for the remaining coin, it has been sold to a private buyer, along with the two-kilogram £2,000 coin, which was valued at £120,000.

Welcome to the World of Whisky Casks: Cask Buying Guide Printed How Will Brexit Affect The Whisky Industry?