A Complete Guide to the Vintage Rolex Milgauss

History of the Milgaus watch, one of Rolex’s masterpieces of engineering that was sadly discontinued in 1986 but remains collectable.

The Birth of the Rolex Milgauss

The name Milgauss stems from the French mille meaning thousand and gauss, which is a measurement of magnetic induction. The first Milgauss design was intended for use in the world of science and engineering, to allow those working in areas of high magnetic output to be able to do so without their timepieces being affected by the magnetism. The key feature of the Milgauss is the anti-magnetic alloys within the movement and an iron shield; the adapted movements were given the letter M – 1065M and 1066M – to differentiate them from the standard movements.

When the Milgauss was first released in 1954 it was celebrated as a masterpiece of horological engineering. This was due to the fact that it completely surpassed all of its goals in terms of its ability to withstand magnetism, it was certified to survive up to 1000 oersted (a measurement of magnetism) but was recorded to be unaffected by up to 5000 oersted – five times its expected resistance.

Despite being a work of genius, the Milguass never had the popularity of other sports models. This is perhaps because its qualities were specific to a professional market and unlike the Sea-Dweller, Explorer and Submariner, its main selling point had no recreational value. Its lack of mainstream interest meant that the Milgauss sadly went out of production in 1986.

The first Milgaus was model 6541 and was released in 1954. It had a black submariner-type bezel, with a black face and silver-coloured, leaf-shaped hands and a 1065M movement. Unlike many of the first edition Rolexes, the Milgauss did have the name printed on the dial, it was in red and sat above the 6o’clock position with the chronometer certification, which was in white. There are very few of this type in circulation because it was very quickly superseded by the second edition, which had its own, specially designed dial.

The Milgauss dial had the Rolex crown logo at 12o’clock instead of the usual triangle hour mark. On the second edition onward the three, six and nine and o’clock points all had metal arrowheads as their markers, with small luminova dots adjacent to them. The model name was moved to sit below the Rolex logo at 12o’clock, and remained in red.

The third version added a small red arrowhead to the seconds hand and the removal of the luminous spots beside the metal arrows. Rolex also gave the third edition Milgauss its own personal bezel, an upgrade from the Submariner-type one of previous models. The new Milgauss bezel had the numbers 1-5 marked around it, with a red triangle at the 12o’clock position.

The fourth edition of the Milgauss 6541 marked the introduction of the famous Milgauss lightening bolt seconds hand. This version was later available also with a honeycomb dial and given an updated 1066M movement.

The Milgauss 6543 was released in the late 1950s with an improved case design on the 6541 but retaining many of the iconic design features of the original model.

Of the Rolex Milgauss models available the ‘65’ models are generally more sought after as they were available for a shorter period of time and have more quirks that collectors find interesting. 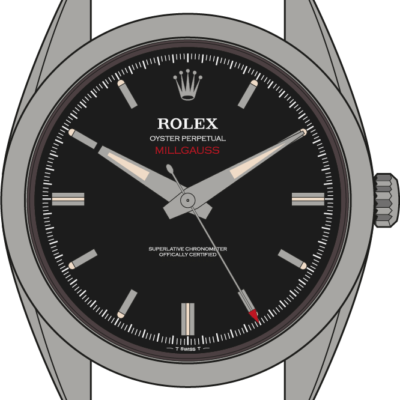 In 1961 the Milguass 1019 replaced the earlier styles with a radical new look. The 1019 was a much simpler design, which returned to the straight seconds hand and adopted a plain, smooth, metal bezel. The first edition of the 1019 watch was available with either a black or a metal dial – made of aluminium – and the dial show minute, second and quarter-second markings. The T – Swiss – T mark in this model also shows a change in the luminosity of the material. The hands were made from an anti-magnetic alloy and are notable for their angled setting. Hour marks were changed from dots and arrows to metal batons.

The update was swiftly followed up by a second edition of the Milgauss 1019, where the dial was white and the batons had black lines on them and small luminous tips. This model and its predecessor remained in production until 1986, when the Milgauss was discontinued. Because of the long production line and relatively little changes to the design, the Milgauss 1019 is relatively less sought after than the ‘65 models.

The next edition of the Milgauss 1019 to be released, toward the end of the decade, received an upgraded movement; the 1580M. Other changes included the removal of the luminous dots from the hour points, replaced instead by black lines; these were also added to the hands. This was due to the design criteria of this model; there was a specific need for a completely radiation-free watch, which meant a removal of the luminous additive in the paint, which could have affected radiation readings in very sensitive scientific situations.

Things went quiet on the Milgauss production front for a while, until a further edition was released in the mid-1970s. In this edition of the 1019 the quarter second markers were removed, and the luminous paint was added once more to the hands – which were now flat – and the hour batons. The penultimate release of the 1019 had a black dial, and the batons were full steel, with luminous semi-circles at the head. The bracelet also upgraded from a folded 20mm construction to a solid construction.  Finally, an alternative dial became available with full dots at the hour markers, rather than the semi-circular edition.

Despite being generally less popular with collectors the Milgauss is still a fascinating vintage watch and a feat of engineering. If you want to know more about your Milgauss watch including valuations and sales then please get in touch by emailing [email protected].

A Complete Guide to the Vintage Rolex Sea-Dweller

A Complete Guide to the Rolex GMT-Master