A Complete Guide to the Rolex GMT-Master

Your guide and introduction to the history of GMT-Master. Find out more about your vintage GMT-Master watch including model progression.

A brief history of the Rolex GMT-Master

The concept of a GMT-Master was first born in 1953 when Rolex was approached by the airline Pan-Am, to create a watch that could simultaneously tell the time in two time zones. The Rolex Submariner 6204 was used as the basis for the development of the soon to be GMT-Master. The 6204 was in need of several adaptions to make it fit for purpose: They famously added a date wheel and cyclops, added a revolutionary 24-hour hand and the famous two-tone bezel with numbers up to 24.

The Pan-Am editions were colour coordinated for ground staff (white faced) and air crew (black faced) to differentiate between them. The white-faced models are incredibly rare, with fewer than 200 produced, and are highly sought after by collectors. 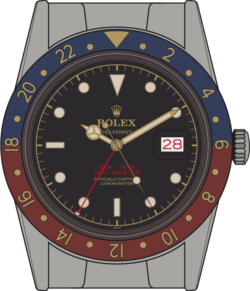 The acrylic brown & blue bezel (not shown) was prone to cracking 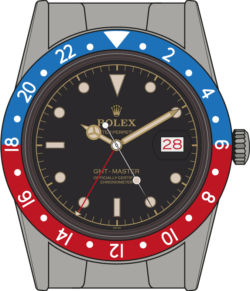 With the iconic red and blue bezel, now made of metal 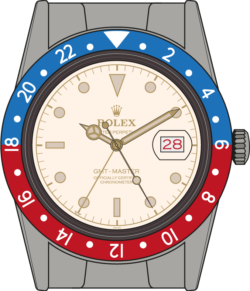 The original GMT-Master 6542 was first produced in 1954; it was the only GMT to display the depth rating, as this was obviously of lesser interest to those who spend most of their time 30,000ft above sea level. This rating was written in red text, like some of the Sea-Dwellers and the Submariners. As with those models, this feature makes the first edition 6542 very valuable in terms of collectability.

The original bezel used on the GMT-Master was created with transparent acrylic, with the numbers printed on the inside; this was supposed to prevent issues with reflecting light into pilots’ eyes. The bezel was then coated with a metal alloy, to give it the recognisable metallic façade that other Rolexes had. The bracelet on this model was 20mm riveted with a 1036 movement. The second edition saw the removal of the depth rating and there were also versions available without the cyclops included.

In 1954 the Pan-Am specified model was released. This GMT-Master had a special edition white face which was only issued to ground staff and is highly collectable.

By the fourth release of the 6542, the bezel ring was also changed to metal and the seconds hand returned to its former gold colour and as per its previous model it had a 1066 movement. Production of the 6542 continued until the mid-1960s, despite the release of the 1675. Changes during this time were minimal; the luminous material used altered from luminova to tritium, marked by the addition of the words ‘Swiss T<25’. 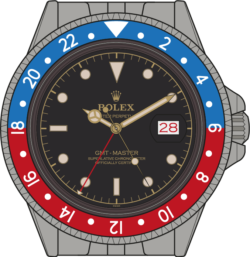 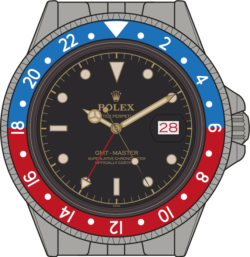 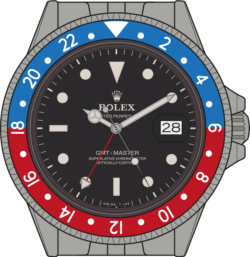 The GMT-Master 1675 was launched in 1960 and was the first GMT-Master to fit crown guards. The first edition guards were pointed and the crown size remained the same. Another subtle but interesting alteration for this edition is the introduction of a slight curve in the white triangle on the 24-hour hand. A 1565 movement was used in this model and the text on the dial read ‘Superlative Chronometer Certified’.

For the second edition of the 1675, very little changed other than the triangle at the tip of the 24-hour hand increased dramatically in size. This was the same for all subsequent release of the 1675.

The third edition saw the chronometer text and the Rolex logo change in colour from gold to white; this update makes the gold-type editions more desirable to collectors as they were available for a shorter period. The minute markers remained in gold on some releases – these are an interesting find and these details make this model easy to date. The other key change in the third release in the colour of the text on the date wheel, which was now printed in black rather than red, which was then carried through all subsequent releases. 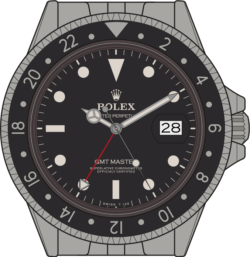 The fourth edition saw the 1675 transition to an all-white design; apart from the hands and hour markers, which changed in the release that followed, whereby the hour markers changed from and ivory cream to white. It also updated to a 1575 movement. The next release included some more design changes; the hands were now silver in colour (stainless steel) and included a new crown guard, which went from pointed to square tipped.

A further release of the 1675 in the late ‘60s can be distinguished from other releases by noting the elongation of the minute markers. In 1974, Rolex overhauled the design of the 1675, giving it a new black bezel and a jubilee bracelet, although the Oyster bracelet was still optional. This edition of the GMT-Master was the only sports watch to adopt the jubilee for factory fitting.

The GMT-Master is an iconic favourite, with enough interesting developments and quirks to make it interesting for collectors. If you would like more information on valuing or selling your vintage GMT-Master then please email [email protected].

A Complete Guide to the Vintage Rolex Sea-Dweller

A Complete Guide to the Vintage Rolex Milgauss