An introduction to the history of the Rolex Cosmograph including a guide to the changes in model and editions.

The Birth of the Rolex Cosmograph

The name Cosmograph, started with an earlier Rolex model, which traditionally had a window that showed the lunar cycle, hence the name cosmo meaning space (the cosmos) and graph, to draw or chart. Despite the removal of this feature from later editions the Cosmograph kept its interstellar moniker when it was used for the iconic sports model 6239 in 1960.

Nowadays, the Cosmograph couldn’t be farther removed from its cosmic beginnings. As of the 1960s it became heavily associated with car racing, eventually adopting the nickname Daytona, which is printed on the dial in red. The name was synonymous with Daytona beach, Florida, the home of NASCAR racing and the Daytona International Speedway.

The Rolex Cosmograph shot to the forefront of popular attention after one was famously seen on the wrist of Paul Newman following production of the film Winning, a film about racing that later inspired Newman to try his luck on the track professionally. Newman’s watch was a gift from his wife, Joanne Woodward, who had the words ‘Drive Carefully Me’ engraved on the back. The Newman Cosmograph models are highly sought after and quite rare, and for this reason they often sell for approximately £80,000 at auction.

Key features of the Cosmograph include:

The three totalisers show the times recorder by the push buttons, hence its popularity for recording race times. 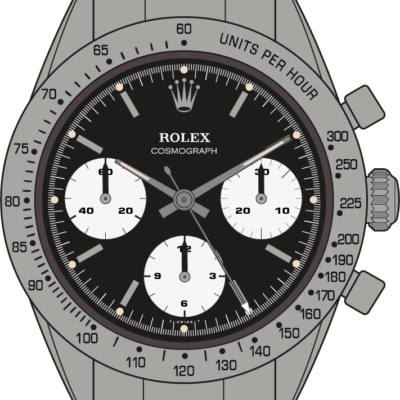 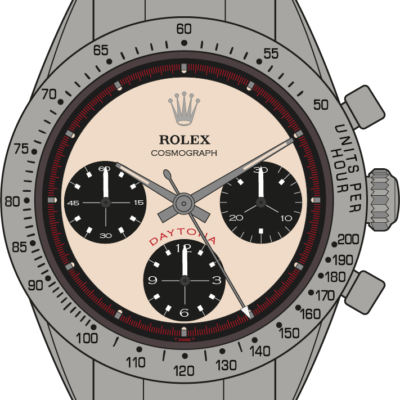 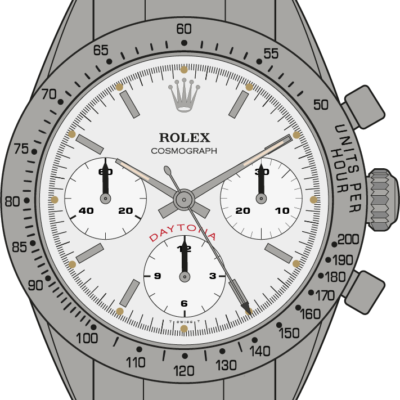 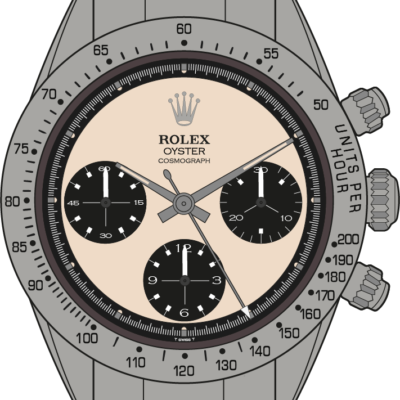 The first official Cosmograph was launched in 1960 and had a 72B movement and a 19mm riveted bracelet. It had two different dial options, a standard black dial with three white totalisers, or what was known as an exotic dial. The original Cosmograph bezel was calibrated to 300 units per hour and made of metal. The hands were silver with luminous lines on, whilst the hour markers were silver batons with small luminous circles at the top.

The second release of the 6239 equipped with the exotic dial has become commonly known at the Paul Newman dial, after the actor turned racing driver was often photographed wearing his whilst racing. Newman’s watch had been a gift from his wife to mark his career change, little did they know that in doing so they would make this edition of the 6239 one of the most prestigious and sought-after watches of all time. The exotic dial is white, with a black rim, the minute markers are in red and the hour markers a small, silver square, with a luminous semicircle on the inside. The totalisers are all in black, but the defining feature of this watch is the word Daytona, in red, which sits over the top of the central totaliser. This edition also had a new bezel, calibrated at 200 units per hour.

The third edition of this model saw the removal of the word Daytona from the dial, and the addition of a 722/1 movement, the minute markers also changed from red to white.

The fourth release 6239 had a very rare dial format; entirely in silver, with the red Daytona text returning to the centre.

In 1965 the 6262 launched, to replace the 6239, keeping the metal bezel and with a choice of the exotic or standard black dial. The 6262 itself was replaced by the 6265 in 1971, this model had a much larger winding crown than other releases, which also had the three dots below the Rolex logo rather than the minus sign. The stop/start pushers were also waterproofed on the 6265 editions. 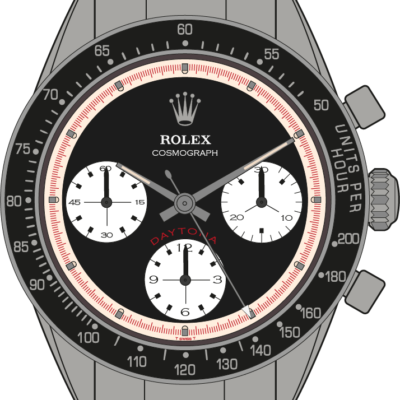 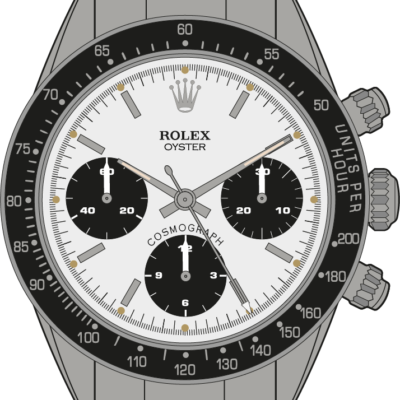 The 6241 was the second model of the Cosmograph to hit the market in the early 1960s. It had a revamped look with a black plastic bezel insert with white numbers on. This edition was available with either a standard or exotic dial and had a 72B movement. The main feature of the second edition 6241 was the colour change of the seconds hands, from silver to white.

The Cosmograph 6263 was available with the two dial options and had an updated crown; the minus sign below the Rolex logo was changed to include three dots. This model had the word Cosmograph written on the dial in a semicircle below the hands. The ring around the outside of the dial was removed and the hour markers changed from silver squares to batons with luminous circles at the outside edge. Model 6263 also used Tritium for luminescence, as indicated by the mark T Swiss T above the 6o’clock marker. The final edition saw the word Cosmograph change to Daytona, once again written in red. 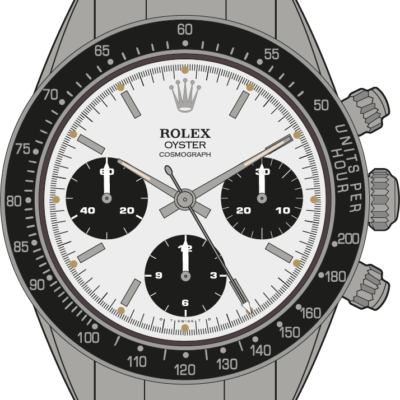 In 1965 the Cosmograph 6240 entered the Rolex marketplace. The main feature of this watch was the newly waterproofed stop/start pushers and the addition of the words Oyster Cosmograph below the Rolex logo.

This model 6240 was the first Cosmograph to have an official depth rating (50m) and had a slightly smaller winding crown than other models. Interestingly this model has the words O T Swiss T O at the bottom of the dial.

Interestingly the Cosmograph did not pass the rigorous testing that NASA conducted in secret, and so was not the watch that ended up going to the moon. However, it is still a highly collectable Rolex. If you are interested in valuing or selling your Rolex Cosmograph please email [email protected] for more information.

A Complete Guide to the Rolex Datejust

A Complete Guide to the Rolex President or Day-Date

A Complete Guide to the Rolex Air-King