This expression was distilled in 1983, which you may recognise as the year that Port Ellen closed its doors, making this whisky some of the last Port Ellen whisky ever made. It was bottled as part of Douglas Laing’s Old Malt Cask range in 2004. Only 525 bottles were ever produced, and you can be the proud owner of one of these bottles for £1,366. 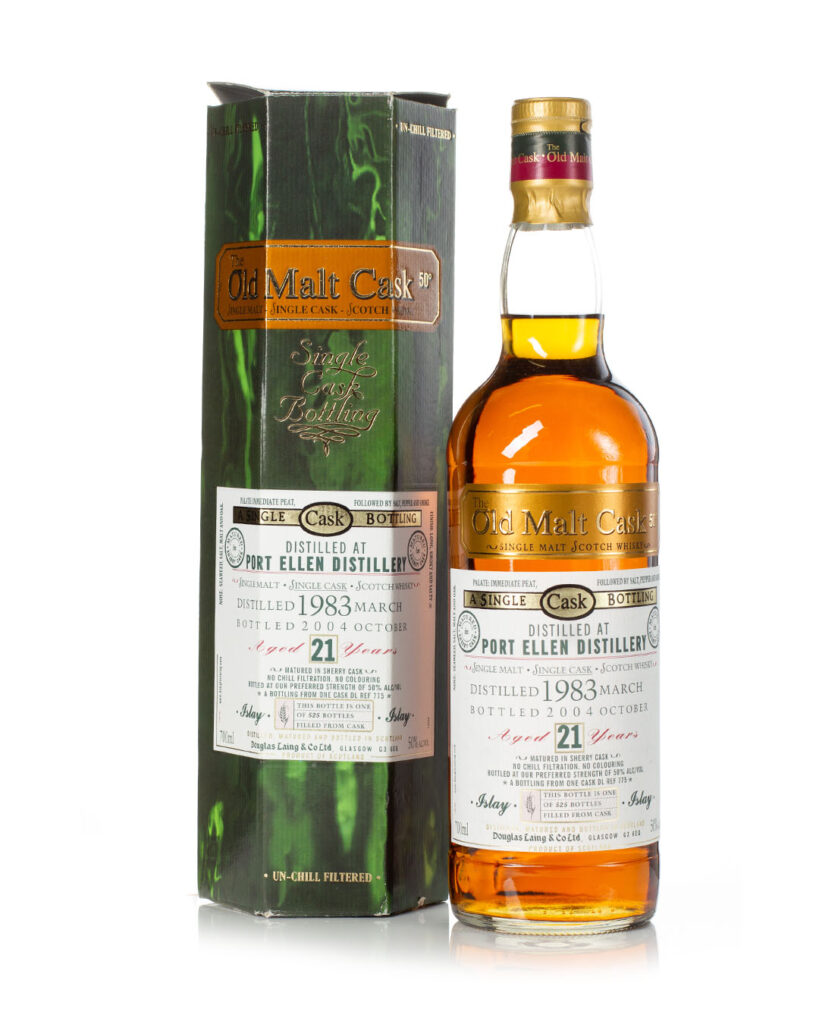 Douglas Laing & Co is a family-owned, independent whisky bottler based in Glasgow, that was founded by Fred Douglas Laing in 1948.

Fred Douglas Laing had served in the Royal Air Force and upon returning home from World War II, went nearly immediately into developing a whisky business. In 1945, Douglas Laing partnered with an American friend in the hopes of marketing the King of Scots brand throughout the USA and Europe. By 1948, Douglas Laing had acquired sole ownership of the business.

To protect and develop the business, Fred began establishing contracts with distilleries across Scotland as an independent bottler, many of which still stand today.

From 1966, Fred began to train his son, Fred Hamilton Laing, in the ways of the company. After apprenticeships at various distilleries where he learned how to blend and bottle whisky, Fred Jr. joined his father at Douglas Laing & Co and would eventually run the family business.

In 1975, Douglas Laing & Co bottled The Big Yin, the first of Billy Connolly’s Nippy Sweeties, which was sold at Connolly’s shows and became part of his own brand. The last remaining bottle of The Big Yin was donated by Laing to Glasgow Museums in 2016. Douglas Laing & Co saw other cultural successes such as being introduced to The Rolling Stones and giving the band King of Scots whisky in 1976.

After Fred’s passing in 1984, brothers Fred and Stewart took on the company together.

1990 saw Fred Jr. meeting Her Majesty the Queen to receive The Queen’s Award for Export.

Douglas Laing & Co released their first ever single cask single malt bottling in 1999, under the Old Malt Cask brand. This is followed by the Old and Rare and Directors Cut ranges in 2002.

In 2013 the brothers parted ways and Fred’s daughter, Cara, then joined the team as Director of Whisky, becoming the third generation of the family business.

Douglas Laing & Co have continued to bottle various ranges of whisky and are now bottling whiskies from all 6 regions of Scotland. They revealed plans to build a new distillery in 2017 on a Glasgow site and acquired Strathearn distillery in Perthshire in 2019.

A Complete Guide to the Rolex Datejust YouTube: Ardbeg Provenance – What Makes This Bottle One Of The Most Iconic Ardbeg Bottlings Ever?