Considering the similarities between the Macallan Select Reserve series and the Macallan Fine & Rare collection, it will be no surprise that one is quite heavily based upon the other.

We currently have a Macallan 1948 Select Reserve listed on our shop. One of the most common questions we receive about this bottle is: what is the difference between a Select Reserve and a Fine & Rare?

The Macallan Select Reserves were released in the late 1990s, representing a distinct change from historic Macallan releases. When Macallan took charge of their own bottling and packaging in the 1980s, ending the tenure of Gordon & Macphail, the distillery began experimenting with packaging. The Macallan Select Reserves were beautifully presented in either large, dark-wood boxes or tall, light-wood tubes. The vintage is displayed in red font on the front of the cream label. The sleek and simple presentation lends itself to the simple luxury that is often associated with Macallan, and with the Fine & Rare series that followed, with the latter series having extremely similar packaging to the Select Reserves.

So first things first. The vintages and age statements.

By comparison to the Select Reserves, the Fine & Rare series contains 58 vintages to date, with more on the way.

Next, we will take a look at the packaging. The packaging of the two series is extremely similar, but there are a few differences to note.

The Macallan Select Reserves were something of a test run for the Fine & Rare packaging. As such, it is no surprise that they are similar. However, in the interest of efficiency, let’s look at some of the dissimilarities.

The first, and perhaps most obvious difference, is the boxes. The Macallan Fine & Rares are presented in a rectangular wooden box with black metal fasteners. By contrast, each vintage in the Select Reserve series is presented in a different box. The 1946 is presented in a large, dark-wood box with a small gold-coloured plaque on the front. The 1948 comes in a tall, light-wood tube, as well as an outer cardboard tube.

Next are the labels. A little more difficult to differentiate. All bottles are presented with cream labels, with the vintage statements in red and the Macallan logo emblazoned above, and a neck label showcasing the age statements. However, there are a couple of intricacies that make the labels different.

The Intention Behind The Macallan Select Reserves

The last difference to note is the intention behind the creation of the bottlings. The Select Reserves were not intended to become a sprawling series like the Fine & Rares were. Instead, the Select Reserves were created in order to gauge the public appetite for luxury bottlings. Of course, Macallan was no stranger to releasing high-age statement whiskies at that time, but it was a stranger to releasing bottles specifically aimed at the most affluent whisky collectors. The Select Reserves allowed the distillers and the marketing team to test the waters and whet the public’s appetite before they committed to creating a long-running series.

This is not to say that the Macallan Select Reserves are not worthy of their own luxury status. Quite the opposite. The fact that they were released as something of a ‘test’ means that the number on the market is extremely small. It also means that they are a lot cheaper in comparison to the Fine & Rares.

More on prices and performance later. For now, let’s gain a little more context surrounding the Macallan Select Reserves and how they came to be.

1946 was the beginning of the post-war period in many countries around the globe. World War II ended in early September 1945, and the vast majority of the world’s population had to contend with significantly reduced populations, rationing, the rebuilding of infrastructure, and the desperate effort to return to normalcy following the Allied victory. Also in 1946, the first democratic elections were held in Vietnam, UNESCO and UNICEF were founded, and celebrities such as Alan Rickman, Diane Keaton, and Liza Minelli were born. 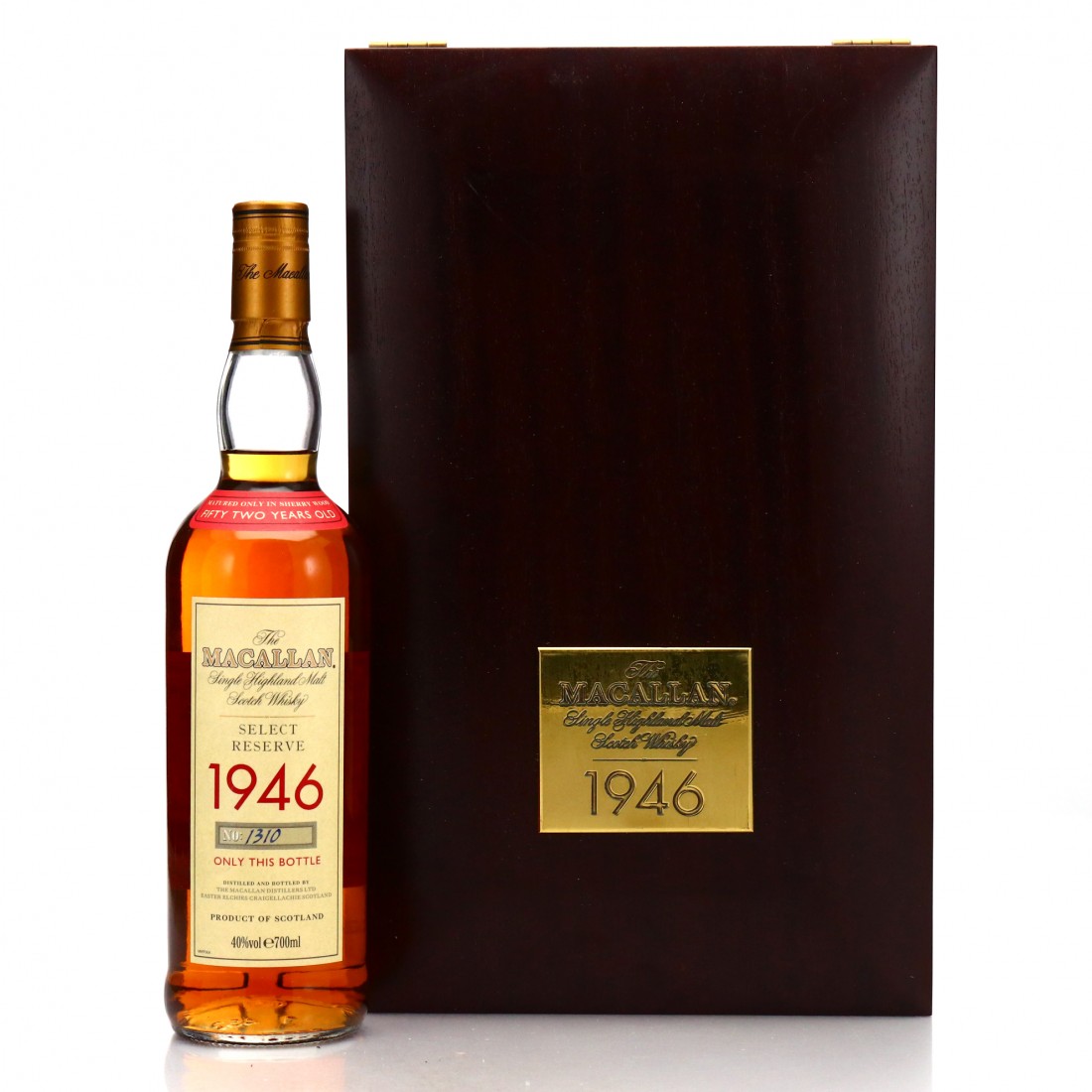 It was also the year in which the Macallan 1946 Select Reserve was distilled. The whisky was matured in Macallan’s vaults for 52 years before being bottled in 1998 for the Select Reserve series.

The bottle is presented in a beautiful, dark-wood box. Each bottle bears an individual bottle number, and the text ‘ONLY THIS BOTTLE’. This adds a deeper sense of ownership and is a clever marketing ploy by Macallan.

It may seem contradictory that such a luxurious whisky should be produced just one year after the end of World War II. However, the timing of the distillation meant that coal was heavily rationed and very expensive. As such, this Macallan 1946 Select Reserve was made with peated malt. Macallan is notable for sherry bomb whiskies, not peated whisky, so this old vintage, high-age statement, peated Macallan whisky truly is a rarity.

1948 saw the establishment of the World Health Organisation, the signing of the Treaty of Brussels, and the assassination of Mahatma Gandhi. Notable births include Stevie Nicks, Olivia Newton-John, and King Charles III. 1948 also saw the distillation of the Macallan 1948 Select Reserve. 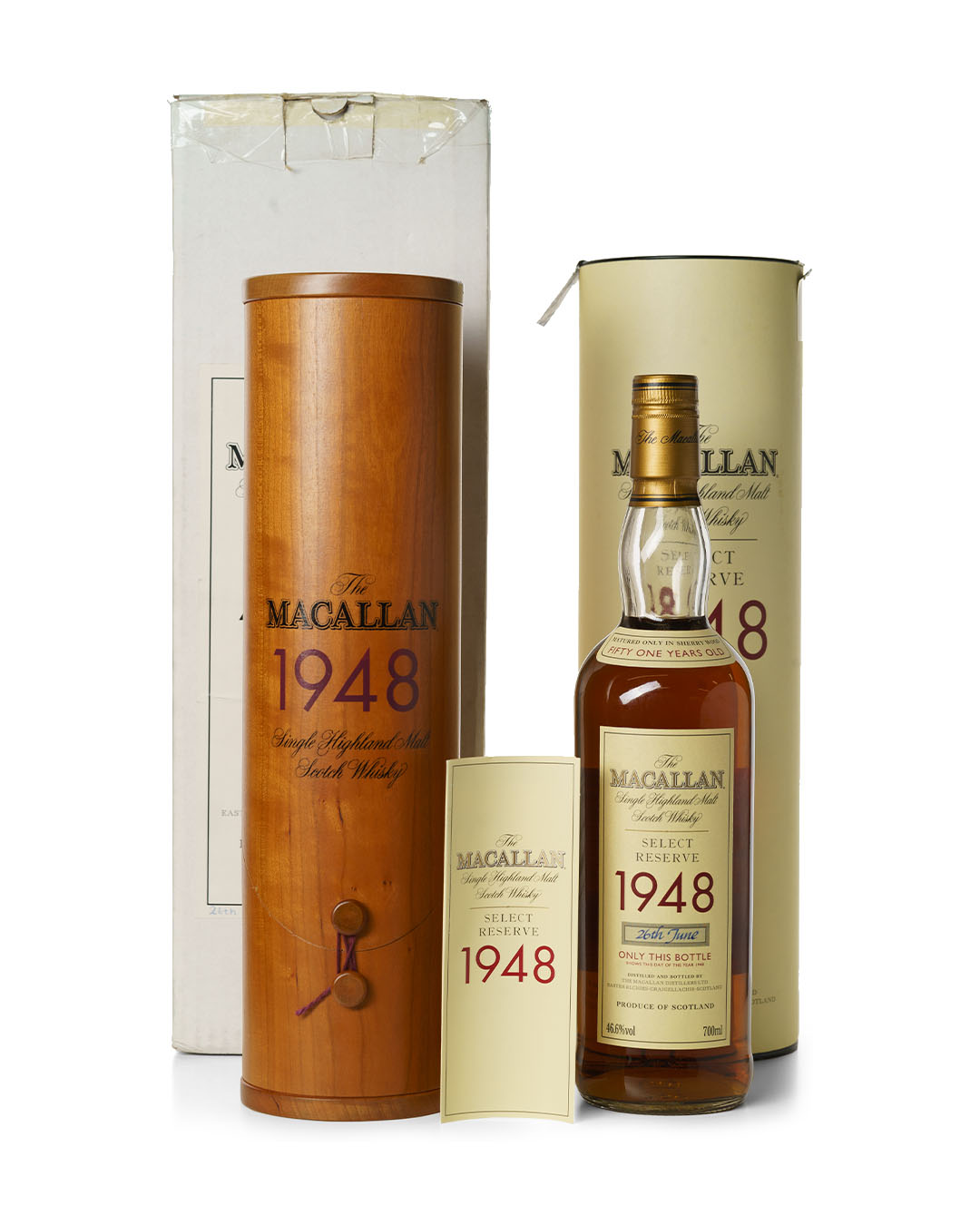 The bottle is accompanied by a light-wood tube that doubles as a display stand for the bottle. Perhaps something of a novelty are the dates displayed on the labels of the 1948 Select Reserves. Of the 366 bottles in the 1948 vintage, each was labelled a different day in 1998/9, meaning that each bottle has its own unique date displayed on the bottle. This gave purchasers the opportunity to seek out bottles with sentimental meanings such as birthdays, anniversaries, and christenings. The addition of the text ‘ONLY THIS BOTTLE’ on the label adds a unique touch.

This venture again shows Macallan’s dedication to their craft. The bottling of the 1948 Select Reserve would have been a huge logistical challenge and would have cost a lot of money. The result, though, is a completely unique bottle for each customer. No other whisky cask has been bottled in this way.

The Performance of the Macallan Select Reserves

Of course, the Macallan Fine & Rares were made to be expensive. The series was made so large so that affluent whisky connoisseurs could build the world’s most luxurious Macallan collection. The Select Reserves were somewhat left to the wayside, to the benefit of those who can see their potential.

We are pleased to be offering a Macallan 1948 Select Reserve on our shop. This particular bottle is labelled 26th June 1999, making it a perfect summer birthday or anniversary gift.

The bottle is available to buy now on our shop.

If you are interested in purchasing the bottle or finding out more, contact us at [email protected] or call the office on 01260 218 718.

Bell’s Whisky Decanters: What to do with them in 2023? The Definitive History of the Most Expensive Whisky in the World