A recent Food and Drink Federation (FDF) report shows that total food and drink exports to the EU have declined by 75.5% in January 2021 compared to January 2020, with whisky exports suffering a 63.1% decline.

The UK leaving the EU has been cited as the main cause of huge losses in the food and drink export market. The FDF have released a snapshot report of January 2021 figures showing a 75.5% decrease of exports to the EU from £1.0bn to £256.4m. Amongst the worst hit industries is whisky, the biggest UK food and drink export, which has seen its exports to the EU fall from £105m to £38.9m. 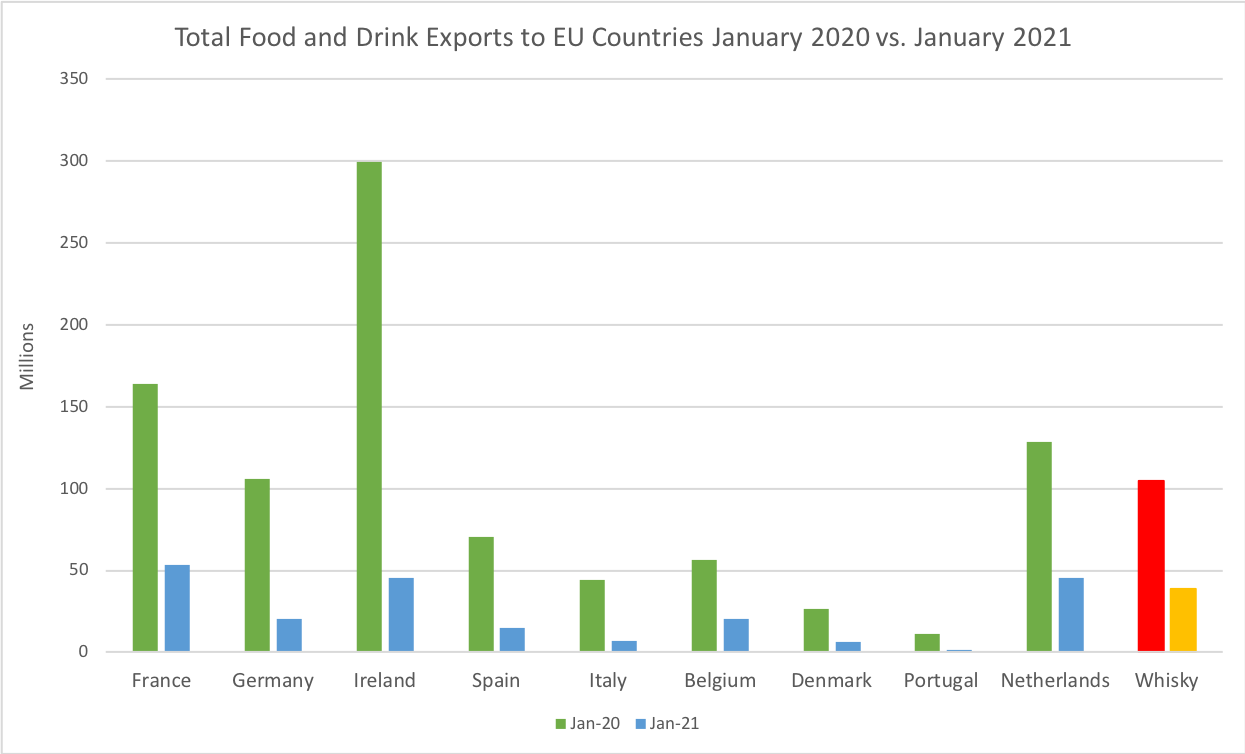 Although Covid-19 has caused delays and decline in demand, it is Brexit that has been identified as the main contributor to these losses. Fergus Ewing, Cabinet Secretary for Rural Economy addressed a letter to George Eustice, the Secretary of State for Environment, Food and Rural Affairs in which he identified 3 issues post-brexit for whisky exports:

This letter was produced in collaboration with the Scottish Whisky Association (SWA) who expressed concerns over the increased bureaucratic complexities putting a halt to whisky exports.

Following this, Scotland’s Cabinet Secretary for Finance Kate Forbes MSP addressed a letter to Rishi Sunak MP, Chancellor of the Exchequer, requesting that he provided support to the whisky industry in the 2021 budget. This support came in the form of a duty freeze on all four alcohol categories which the SWA have said has provided some much needed breathing room for the whisky industry.

The scotch whisky industry also suffered a huge hit in October 2019 when the US imposed a 25% tariff on single malt whisky imports in a dispute with the UK and EU over aerospace industry subsidies. Whisky and other industries had been caught in the crossfire of this dispute causing exports to the US to drop by 35%, amounting to over half a billion pounds in revenue. This tariff has now been suspended for 4 months whilst there are attempts at a renegotiation. You can read more about these tariffs and how they came about here.

All 10 of the top food and drink exports have seen massive decline in exporting to the EU. Salmon has had the worst percentage decline, seeing a 98% loss. Beef, pork, and cheese have also experienced noticeable decline.

With the phased implementation of post-Brexit regulations, it is likely that the UK, and the whisky industry, will not be able to assess the full effect until 2022.