The House of Fabergé has become one of the most iconic and instantly recognisable creator of fine art objects and jewellery in the world, but its journey has not always been smooth sailing. From its conception in the 1830s, Fabergé has seen periods of huge growth, legal battles, political instability before arriving at the point it’s at today.

The Early Years: The Family Business

One of the most iconic jewellery houses in the world, Fabergé first came into being in the early 19th century not with Peter Carl Fabergé but first, with Gustav. In the early 1830s Gustav Fabergé travelled to St Petersburg, Russia from Estonia to train as a goldsmith under Andreas Spiegel. From Spiegel, Gustav then went on to join Keibel, the goldsmith and jewellers to the Emperors of Russia, where he became a master in 1841. The following year, Gustav opened his own jewellery shop, the House of Fabergé, in the basement of a unit in St Petersburg’s most fashionable street, Bolshaya Morskaya and set in motion what would become the biggest name in jewellery and objets d’art.

Just four years after the opening of the shop, in 1846, Gustav and his wife, Charlotte, welcomed their first son – Peter Carl Fabergé. When Peter Carl was just 14, in 1860, Gustav retired from his business and moved the family to Dresden, Germany; the House of Fabergé was still a fully operational business, left in the care of the managers. Whilst in Dresden, Peter Carl undertook a course at Dresden Arts and Crafts School as his first official foray into following in his father’s footsteps. Around this time, in 1862, the family’s second son, Agathon Fabergé, was born. 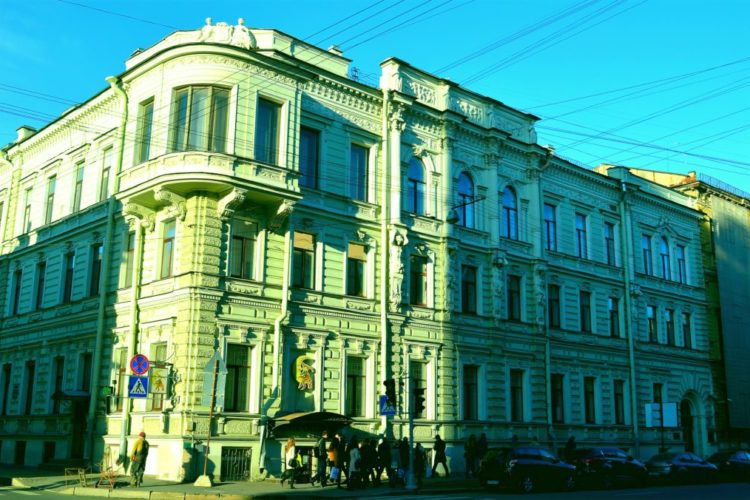 In 1864, at the age of 18, Peter Carl set out on a Grand Tour of Europe as he continued to learn his father’s trade. During this tour, he received tuition from some of the most respected goldsmiths in France, Germany, and England, as well as attending a course at Schloss’s Commercial College in Paris. This allowed Peter Carl to solidify his skills, which he continued to do when he returned from his Grand Tour in 1866. At this time, he returned to St Petersburg and began work under Gustav’s most trusted workmaster, Hiskias Pendin, who became a mentor to Peter Carl. This is where he became familiar with the collections in the Hermitage – the court museum of Russia founded by Catherine the Great in 1764 – as he became involved in cataloguing, repairing, and restoring its pieces. This evoked a great love of antiquity and Peter Carl began to study the forgotten techniques of goldsmiths.

In 1882, Hiskias Pendin, who had been managing the House of Fabergé in St Petersburg, passed away. Now with eighteen years of experience, Peter Carl took on responsibility of the family’s business, and his younger brother Agathon was a partner. In this same year, things began to take a sharp turn for the House of Fabergé. The All-Russian Exhibition took place in Moscow in 1882, during which the newly ascended Tsar Alexander III saw the work of the House of Fabergé and ordered for the work to be displayed in the Hermitage. From then on, the Imperial house became Fabergé’s biggest client and altered the progression of the business dramatically. 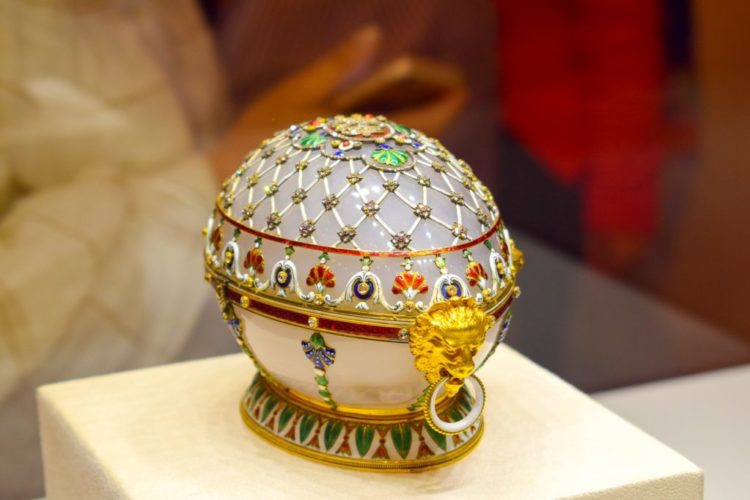 In 1885, Tsar Alexander III commissioned the House of Fabergé to make an easter egg for his wife, Empress Maria Feodorovna. The product was the very first Imperial Egg, the Hen egg, which was a gold-banded, enamel-sheathed egg with a surprise inside. The surprise was a golden hen sitting on a bed of straw that had a miniature diamond replica of the imperial crown as well as a ruby pendant. The Empress was thrilled with the egg, and thus began an annual tradition of imperial eggs that lasted all of Alexander’s reign and was continued through his son, Nicholas II until 1916. The House of Fabergé was given complete creative freedom for the eggs, not even the emperor knew what they would look like, and the only stipulation was that each egg must contain a surprise inside. When Nicholas II continued the tradition, he commissioned two eggs per year, one for his wife and one for his mother. A total of 50 imperial eggs were made over the course of thirty-one years and Fabergé was given the title “goldsmith by special appointment to the Imperial Crown”, by Alexander III.

This success allowed the House of Fabergé to grow, and in 1887 a Moscow branch was opened. A few years later, in 1890, the St Petersburg premises doubled in size too and Peter Carl received the title Appraiser of the Imperial Cabinet. This success continued to grow and in 1896 the House of Fabergé was awarded the State Emblem at the All-Russian Exhibition in Nizhny Novgorod and a royal warrant by the Court of Sweden and Norway.

The turn of the century brought even more success when in 1900 the World Exhibition in Paris awarded the House of Fabergé a gold medal and Paris jewellers recognised Peter Carl as maître (master). In this same year, Peter Carl was also appointed Knight of the Legion of Honour which is the fifth class in the highest order of merit in France; this award is given for twenty-five years of professional activity with eminent merits. As the Fabergé name grew, so did the business headquarters, as the House moved into a purpose built premises at 24 Bolshaya Morskaya, a far cry from the basement it began in. The new premises contained workshops, a design studio, office space, Peter Carl’s apartment, and a showroom. This was the peak of Fabergé’s success, and the house employed five hundred craftsmen and designers.

The first public exhibition of the Imperial family Fabergé collection in Russia was held at the mansion of Baron von Dervis in St Petersburg in March 1902 which displayed the imperial eggs, among other items, including a 25th Anniversary Wedding Clock. This was followed by two expansions of the House of Fabergé: a branch opened in London in 1903, and one in Kiev in 1906. By this time, all four of Peter Carl’s sons also worked in the business and his youngest son, Nicholas, managed the London branch. 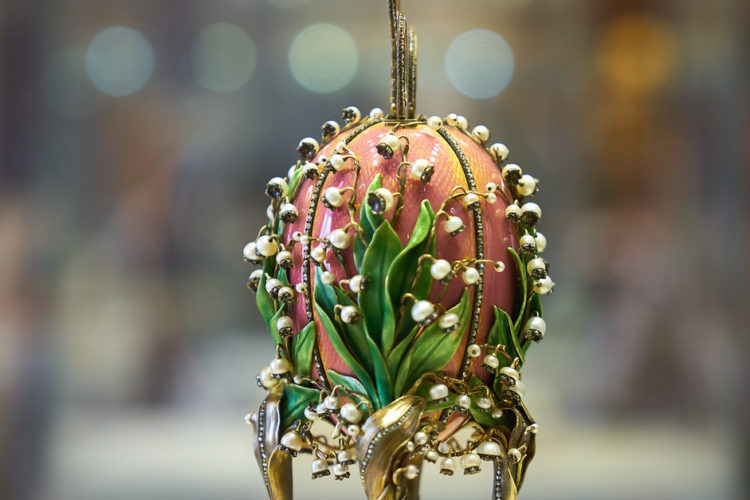 War Breaks Out: A Downturn for Fabergé

The outbreak of the First World War in 1914 marked the beginning of a period of decline for the House of Fabergé. The war resulted in a fall in demand for luxury items, and precious metals were in short supply. Fabergé turned to copper and produced many items such as cruets, plates, mugs, and snuff boxes during this time. This was in addition to producing items for the war effort, including syringes and grenades. The war further complicated things for Fabergé’s international branches as all Russian capital in foreign operations had to be repatriated to fund the war effort. This resulted in the London branch closing in 1915, although trading still continued. The following year, the House of Fabergé became a joint-stock company with 3 million roubles in capital.

1917 brought with it an extended period of unrest for Russia, as the Bolshevik revolution took place. As the Soviets claimed power in parliament and the three hundred year reign of the Romanovs came to an end, big business became a target during a transition to socialism. Business owners were now no longer tolerated, and the House of Fabergé was taken over by the “committee of the employees of the company K Fabergé”. This was taken further in 1918, when the House of Fabergé was nationalised before, in October, the stock was confiscated. As things took a turn for the business, the same could be said for the Fabergé family. With rising tensions, Peter Carl left St Petersburg in November 1918 on the last diplomatic train to Riga, and from there fled to Germany. A month later, his son, Eugene, and his wife travelled by sleigh and then on foot to Finland to seek refuge. At a time of political imprisonment, Agathon and Alexander – Peter Carl’s two middle sons – were arrested by the Bolsheviks and remained in prison for six years.

In June 1920, Eugene travelled to Germany to take his father to Switzerland, where other members of the Fabergé family had settled and, just three months later Peter Carl passed away. His family often said that he died of a broken heart, as the House of Fabergé was taken away from him. In 1924, Alexander escaped from prison when a friend bribed the guards and settled in Paris with his brother, Eugene. Together the established Fabergé & Cie which traded in and restored objects made by the House of Fabergé as well as general objets d’art and jewellery. They marked the pieces they made with ‘Fabergé, Paris’ so that they stood independently of those made by the House in St Petersburg. 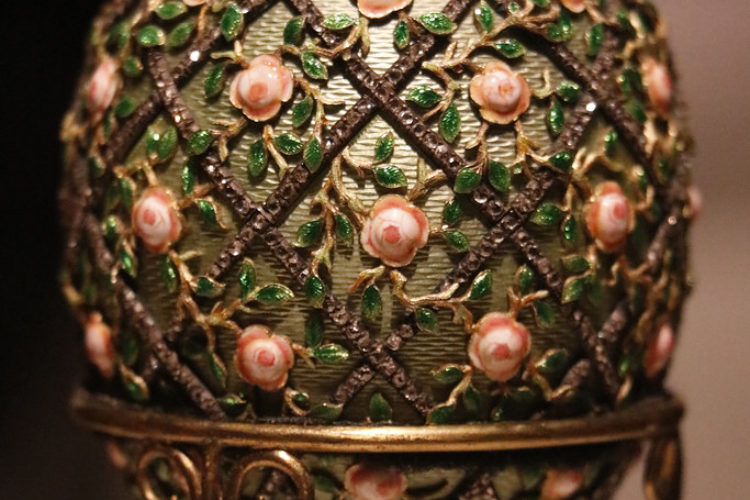 A Legal Battle: The Fabergé Name

The 1930s arrived and introduced a period of legal trouble for the House of Fabergé. In 1937, Sam Rubin began a perfume business and branded them with the name Fabergé, as well as forming Fabergé Inc. He did this without the family’s knowledge or permission. In 1951, the family decided to settle the matter with Rubin outside of court to avoid high legal fees and this resulted in Rubin paying $25,000 to use the Fabergé name exclusively for perfume – this is the equivalent of $268,000 today. The following decades brought a number of changes for Fabergé Inc: in 1964, Rubin sold Fabergé Inc to the cosmetic company Rayette for $26m; the company went through a few name changes and was sold again in 1984 for $180m. In 1987, Fabergé Inc acquired Elizabeth Arden for $700m and in 1989 the company was purchased by Unilever for $1.55bn. This company, so far removed from the original Fabergé and yet using its name, had appreciated in value nearly sixty times over in fifty years. When Unilever acquired Fabergé Inc in 1987, they trademarked the name across a wide range of products internationally, and granted licences to third parties to do the same. This meant that a name originally associated with some of the highest quality antiquities in the world, was now featured on bathroom cleaners and domestic goods.

This was to remain the case for eighteen years until, in 2007, Fabergé Ltd acquired the Fabergé trademarks, licences, and associated rights from Unilever. This was a pivotal moment, and the Fabergé Heritage Council was established to guide the company in pursuit of the original heritage of excellence in creativity, design, and craftsmanship. This led to an official Fabergé relaunch in 2009 where the ‘Les Fabuleuses’ high jewellery collection was revealed. 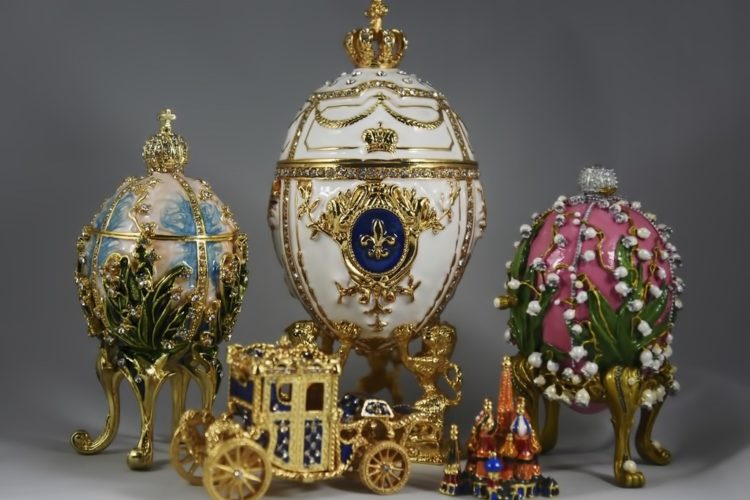 From this point, the House of Fabergé looked upward once more. In 2013, the House was acquired by Gemfields and became the ambassador for responsibly sourced coloured gemstones. In 2015, the first Fabergé watch collection was launched, and the first hand crafted egg since the Imperial tradition, the Pearl Egg, was created in collaboration with Qatari businessman and pearl collector, Hussain Ibrahim Al Fardan. The egg was composed of 3,305 diamonds and 139 white pearls, as well as featuring a unique 12.17ct natural grey pearl. In 2017, the Museum of Natural Science in Houston, Texas hosted one of the largest private collections of Fabergé and became the host of the following Fabergé international boutique. 2018 saw a collaboration with Rolls-Royce, to create the Spirit of Ecstasy Egg which put the iconic Rolls-Royce emblem in a case of Fabergé.

The House of Fabergé has continued to excel and now offers bespoke custom jewellery services as well as a range of beautifully crafted jewellery and watches. The House has continued the legacies of Gustav and Peter Carl Fabergé and will likely continue to do so far into the future.

Do You Have Faberge For Valuation?

Silver Teapots: Everything You Need To Know