The History of Robert ‘Mouseman’ Thompson

An introduction to Robert ’Mouseman’ Thompson

Mouseman is a name synonymous with exceptional quality furniture and in recent years with record prices at auction. Some of his furniture from the 1930’s can make in excess of £20,000, but who is ‘Mouseman’ and why does it make so much at auction at the moment?

Robert Thompson, the Mouseman, was born in 1876 in Kilburn, North Yorkshire, the son of the village joiner and wheelwright.  Although he was sent off to be an apprentice engineer at a young age, he soon returned to his father’s trade and with a greater understanding of design.

Tragedy struck in 1895 when Robert’s father died, leaving him to run the family business.  Although he spent most of his time now working on mundane repairs of barns and fences he was also clearly thinking about his future as he began to lay down reserves of oak for seasoning (essential if you want to produce good quality furniture in the future).

Records indicate Robert was producing furniture for locals in the village from around 1911, although the pieces he created were not in a style we would commonly associate with Mouseman.  A few years later when WWI broke out, Robert remained in the country as he was in a ‘protected profession’, meaning his skills were more useful on the home front than the front line.

Soon after the war was over commissions started to come in on a regular basis, mostly through local churches, and he soon earned an excellent reputation as an ecclesiastical contractor.  In 1921 Robert was commissioned by Father Paul Nevill to furnish nearby Ambleforth College and from this point on Robert’s order book grew rapidly, designing and producing many of the iconic designs still in production today.

Sadly Mosueman lost most of his workforce at the outbreak of WWII but following the cessation of hostilities his business continued to grow and grow.  Robert died in 1955 but was able to ensure that is legacy was in place and assured that he has left his mouse shaped mark on history.  The workshop in Kilburn is now open as a visitor centre and the still continue to produce his designs in the same tradition of craftsmanship today. 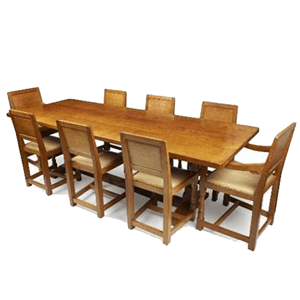 The history of the Mouseman trademark

Sometime between 1924 and 1928 Robert began to sign his furniture with the now iconic mouse mark.  In a letter written by Robert he reveals why he chose the mouse as his mark:

“The origin of the mouse as my mark was almost in the way of being an accident.  I and another carver were carving a huge cornice for a screen and he happened to say something about being as poor as a church mouse.  I said I’ll carve a mouse here and did so, then it struck me, what a lovely trademark’.

The mouse trademark was not registered until 1931 and some of the earliest mice are carved free from the oak and until 1930 most were carved with front paws.  To this day the carvers in Kilburn mark each item of furniture with the trademark mouse and each carver has a distinct style.

The construction of Mouseman furniture

Most of the oak is quarter sawn which not only shows the beautiful medullary rays in the timber but also creates a stronger plank and one less prone to warping.  Sometimes burr oak was used which has distinct knots which resemble cat’s paws; such furniture is highly desirable and worth considerable amounts at auction.

Although Mouseman furniture is made using many of the same traditional methods, advances and changes have been introduced and some of these are a clue to dating the item.  In the 1970’s a few changes were introduced which increased production speed and a move to modern adhesives (from the traditional animal glues) made the need of dowels less critical.

Mouseman furniture is highly influenced by the Gothic style and the Medieval Age; a time where craftsmen were believed to be free from restraint and worked with clean, simple lines.  This also coincided with the ethos of the Arts & Crafts movement that was gathering momentum the time Robert was growing up which sought to reject the mass made furniture of the Victorian age.

One example of timeless design is Robert’s Monks Chair, illustrated here.  Originally commissioned by the monks at Ambleforth Abbey as a comfortable chair to rest on between services, this design is still in production and is one of Mouseman’s most sought after pieces.  The square seat with rounded back has ‘gridiorn’ panels on the back and sides which is in reference to St Laurence, the patron saint of the Abbey, who was martyred on a gridiron.

What is Mouseman furniture worth?

We work closely with auction houses and the trade so can find you the best auction based on your location and in most cases we can find a private buyer too.  There are no charges for our service.

Receive a free valuation for your Mouseman furniture