Business is never boring here at Mark Littler LTD and that is best demonstrated by the sale of a collection of 112 solid silver cow creamers. The cow creamers were collected by an individual from auctions, fairs, and dealers with many coming from the USA. The private collection weighed a total of 25kg and was valued at £85,000. 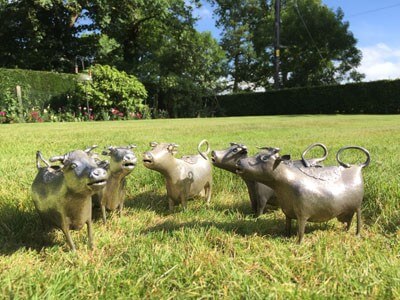 A collection of this size of silver creamers is incredibly rare, often collectors will only have a small number of them. With our specialist knowledge of antiques, it was decided that it would be beneficial to sell through a combination of both auction and private sale to avoid flooding the market with these items.

Cow shaped creamers first appeared in Britain in the 1750s imported from Europe. Dutch silversmith John Schuppe was first to create these cow creamers out of silver and these were imported into Britain. As is often the case, the popularity of the cow creamer among the upper classes initiated a trend for the item within the mass population. However, as silver was so expensive and therefore exclusive to the upper classes in the 18th century, porcelain and pottery versions of the cows were quickly produced in order to make them accessible for the wider public.

Do You Have Antiques For Valuation?

A Complete Guide to the Rolex Air-King The Macallan Handwritten Labels: An Investor’s Guide & Bottle Analysis