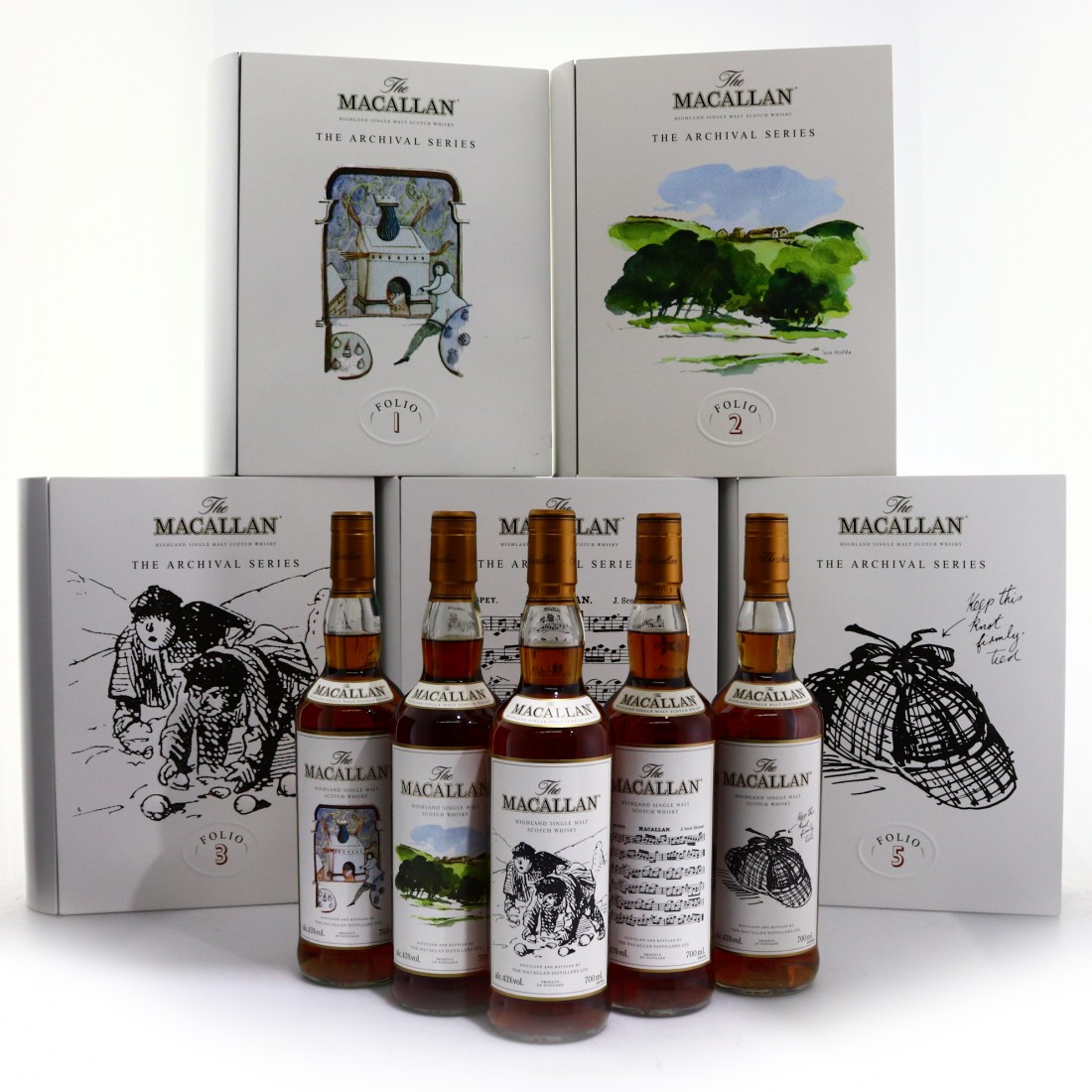 In 2015, Macallan announced a new 24 release series inspired by their advertisements from the 1970s until the 1990s. Macallan describes the archival series as one that “celebrates and revisits The Macallan’s original print, press, and film advertising campaign; mapping the story of The Macallan from a remote farmstead on the River Spey to a whisky that is enjoyed around the world”. This series is designed to celebrate the adverts that first brought the Macallan name into the public consciousness and help transform Macallan into a household name.

There are currently 6 Folio releases, a quarter of what will be the total edition. The first 6 to be released have commemorated the print Macallan adverts that were featured in the Times newspaper. The adverts were designed by Creative Director David Holmes and advert copywriter Nick Salaman and 250 were produced over the 3 decades. Initially featured on the back page next to the crossword, the print adverts got bigger and more creative over time.

Each folio release comes with a hardback, illustrated book with a history of the Macallan and its advertisements. The bottles are sold in a book shaped presentation tin and come with a USB stick with distillery photos.

All of the releases so far have been official bottlings and do not feature an age statement or a vintage. 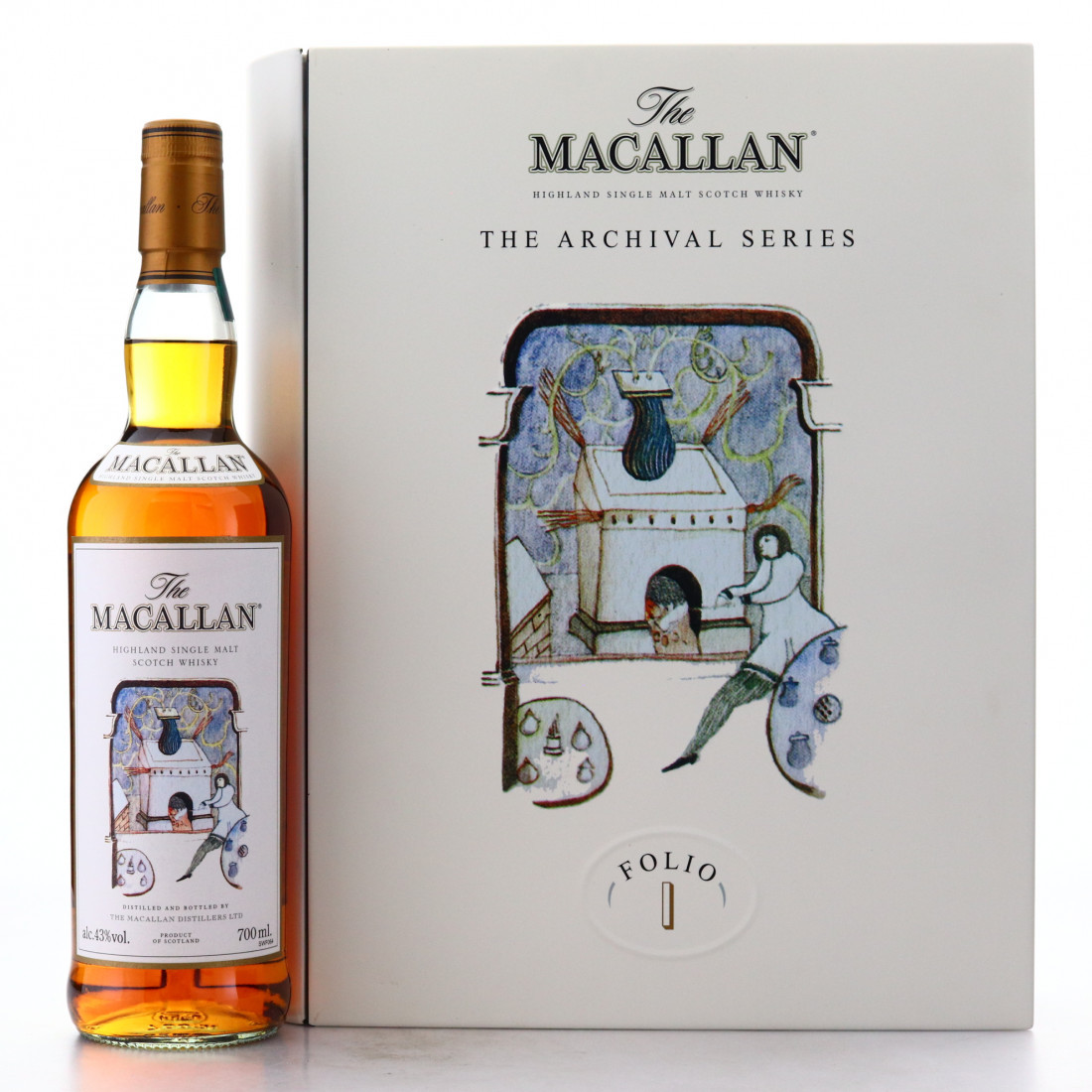 “The Name Macallan Derives from the Celtic Ma Colum”

The first in the archival series, Folio 1, was released in 2015. This bottle was inspired by the first Macallan advert, featured on the back page of the Times newspaper on the 27th March 1980. The advert was a small black and white advert that explains the history behind the Macallan name.

Only 2000 Folio 1 bottles were released and purchase was only available from the distillery. This whisky has been matured in an ex-sherry cask and its tasting notes include vanilla, toffee, and dried fruits.

2017 saw the release of the next in the archival series, Folio 2. Moving on from the name, tThe Folio 2 packaging features the home of Macallan, the Easter Elchies House. The label features a watercolour of the house created by artist Sara Midda. The advert featuring the Macallan estate proudly states that “it is a matter of fact that The Macallan is the best selling malt at home on Speyside”.

Like its predecessor, the Folio 2 was a limited bottling of 2000 and could only be purchased from the distillery. Its tasting notes include ginger, cinnamon, and orange. 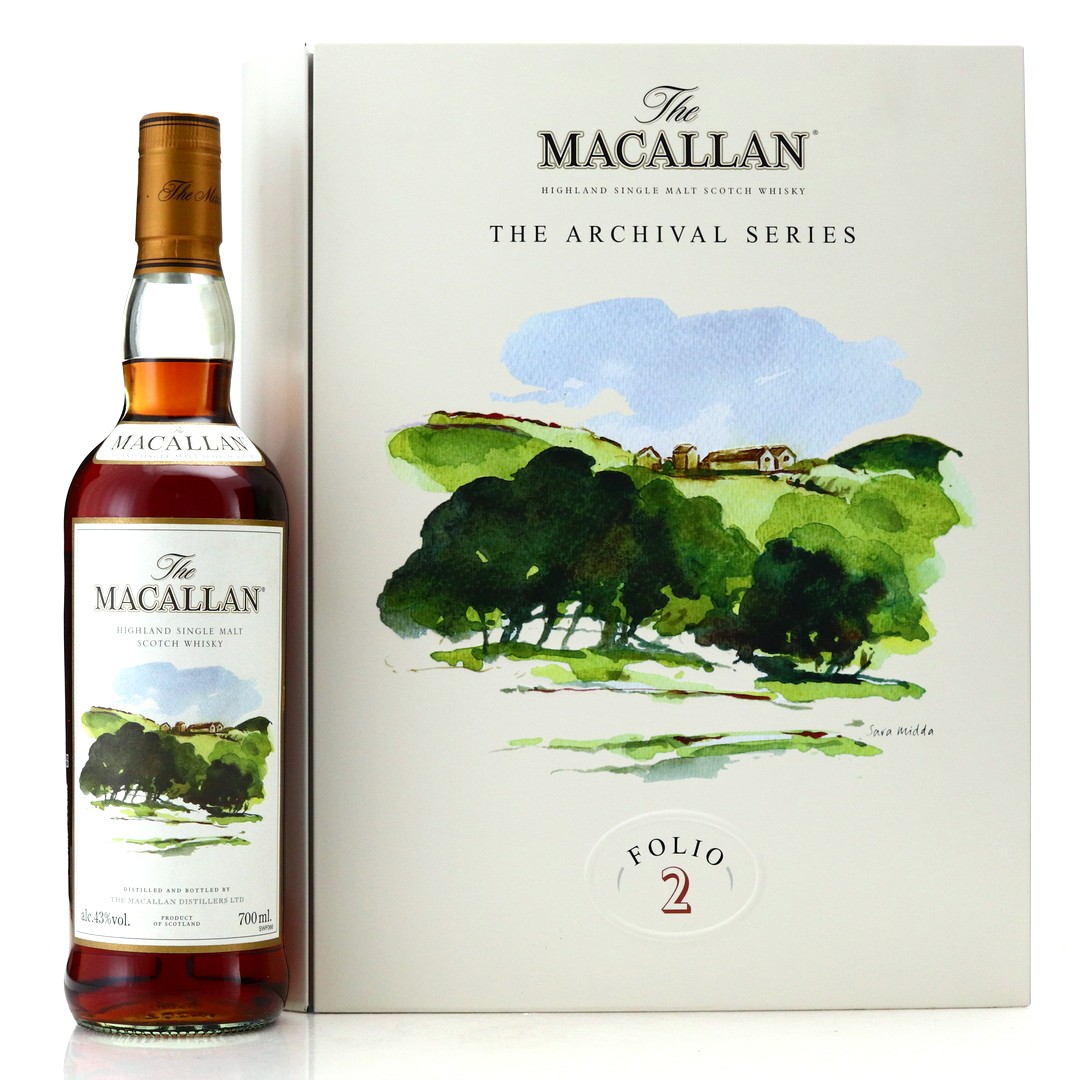 “The Snow Can Linger on Ben Rinnes”

The 3rd release in the archival series, Folio 3, was launched in 2018. This advert featured an illustration taken from a Victorian era Punch magazine and features two characters in the snow. This advert was to promote the idea that whisky is best made when it’s cold, a remark that Macallan claims was first said at the Easter Elchies House.

The Folio 3 release was the last to be distillery only purchase and coincided with the opening of the new distillery on site next to the Easter Elchies estate. Its tasting notes include vanilla, citrus, and some spice. 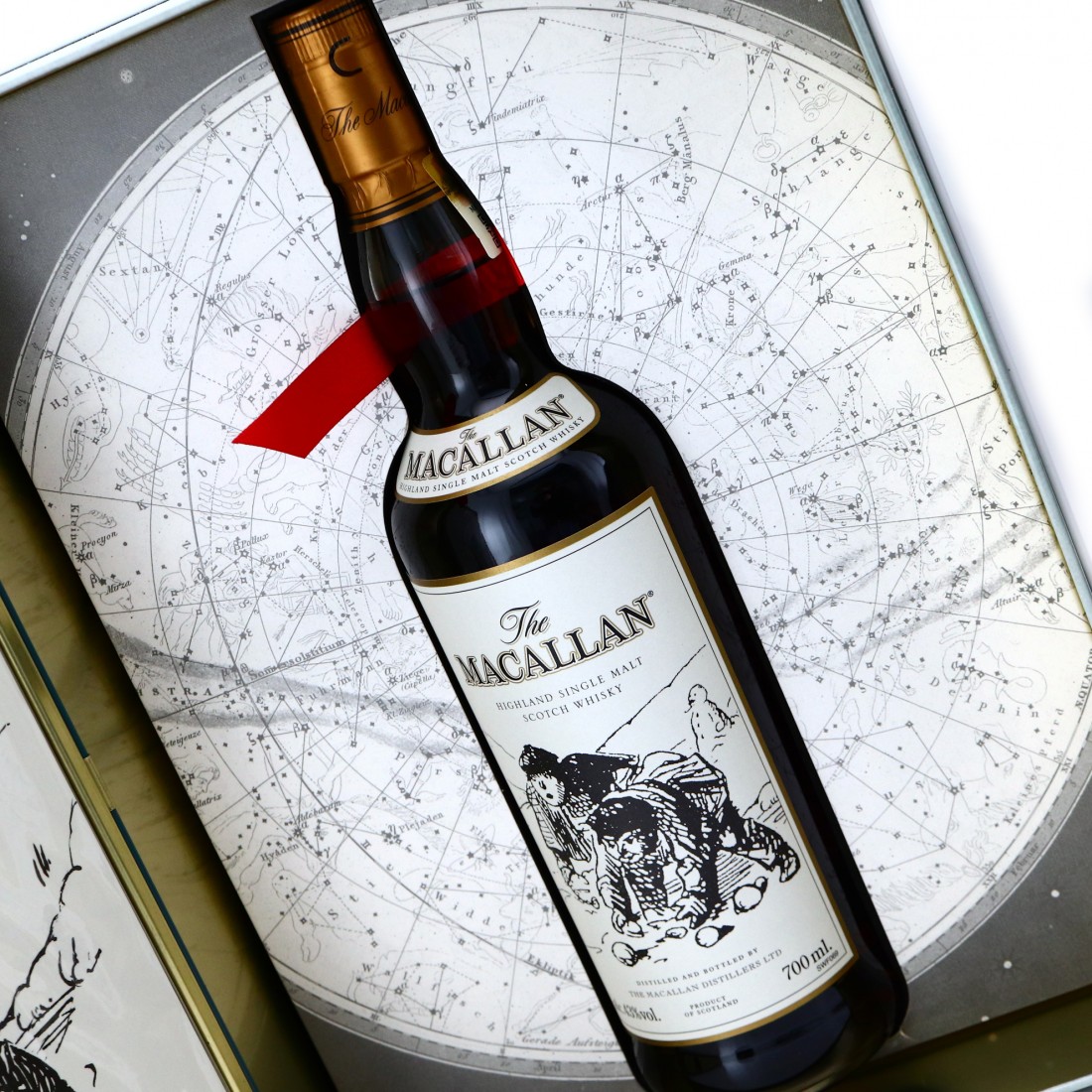 “Music for the Mouth”

In 2019, Folio 4 joined the archival series. This newspaper advert featured a strathspey composed by James Scott Skinner. A strathspey is a dance tune written in 4/4 with an emphasis on certain beats, such as ‘Auld Lang Syne’ or ‘The Bonnie Banks O’ Loch Lomond’. This strathspey was written for Macallan and the advert claims that Skinner wrote it after being “moved to music by the lilting flavour and melting resonances of a tumbler of his favourite malt whisky”. This advert was the first instance of musical notation being displayed in a British newspaper.

The Macallan Folio 4 was the first edition in the archival series to be sold through ballot. The Folio 4 tasting notes include apple, sugared almonds, and spices.

“A Tale of A Luggy Bonnet”

The penultimate Folio to have been released so far is the Folio 5. The Folio 5 was released in 2020 and was inspired by the advert that featured a luggy bonnet, or deerstalker, with its ear covers tied together. The comic cartoon advert has a character lamenting  that he missed an opportunity for a dram of Macallan because his ears were covered by his bonnet.

The Folio 5 was also sold through ballot and was extremely limited in keeping with the series so far. The Folio 5 tasting notes include dates, ginger, and raisin.

The final Folio in the archival series to have been released so far is the Folio 6. This release features an advert that was inspired by Macallan’s former chairman, Allan Shiach, who would often give advert writers Holmes and Salaman somewhat unwelcome suggestions that were a point of contention. The Chairman on the Folio 6 can be seen dancing above a paintbrush and pen, the symbols of Holmes and Salaman.

Folio 6 was also sold through a ballot, suggesting that this may be the method Macallan are keeping for the archival series. Tasting notes for the Folio 6 include pear, chocolate, and orange. 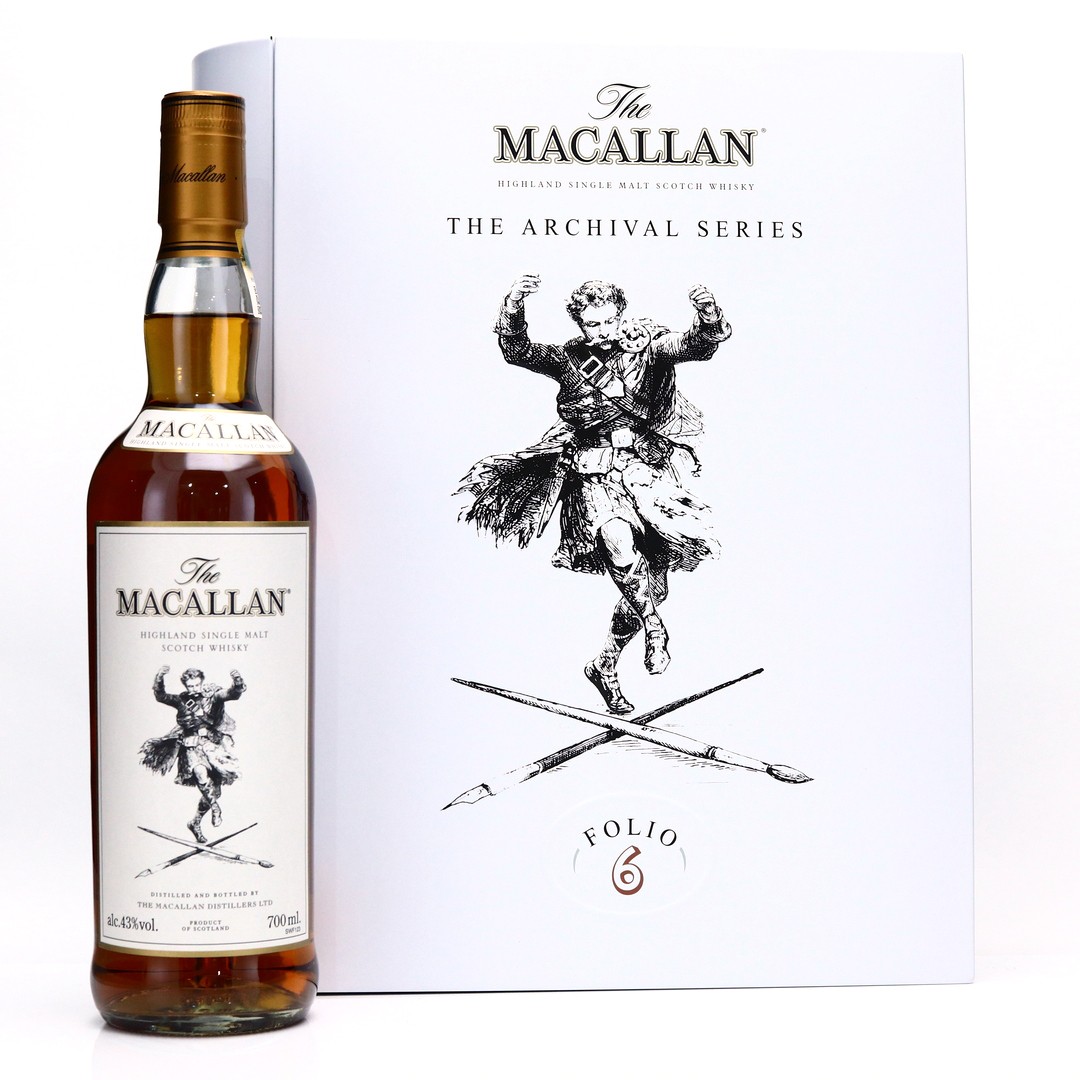 Should You Invest in the Archival Series?

So now that you know everything there is to know about the Macallan Archival Series, is it worth investing in? Watch this space for our investment guide, coming soon.