Japan’s Lost Distillery: The History and Notoriety of Karuizawa

In the mid-2000s, a new whisky phenomenon was on the horizon, promising rare and wonderful bottlings, the likes of which had never been seen in the Western world. I am talking, of course, about Japanese whisky. Scotch whisky stood firm at the head of the market, with distilleries such as Macallan, Ardbeg, and Bowmore producing top-notch expressions. However, simultaneously, a mothballed distillery nestled at the foot of Asama was quickly becoming notorious, and would soon become the most expensive, and sought-after, Japanese whisky in the world. This is the history and notoriety of Karuizawa. 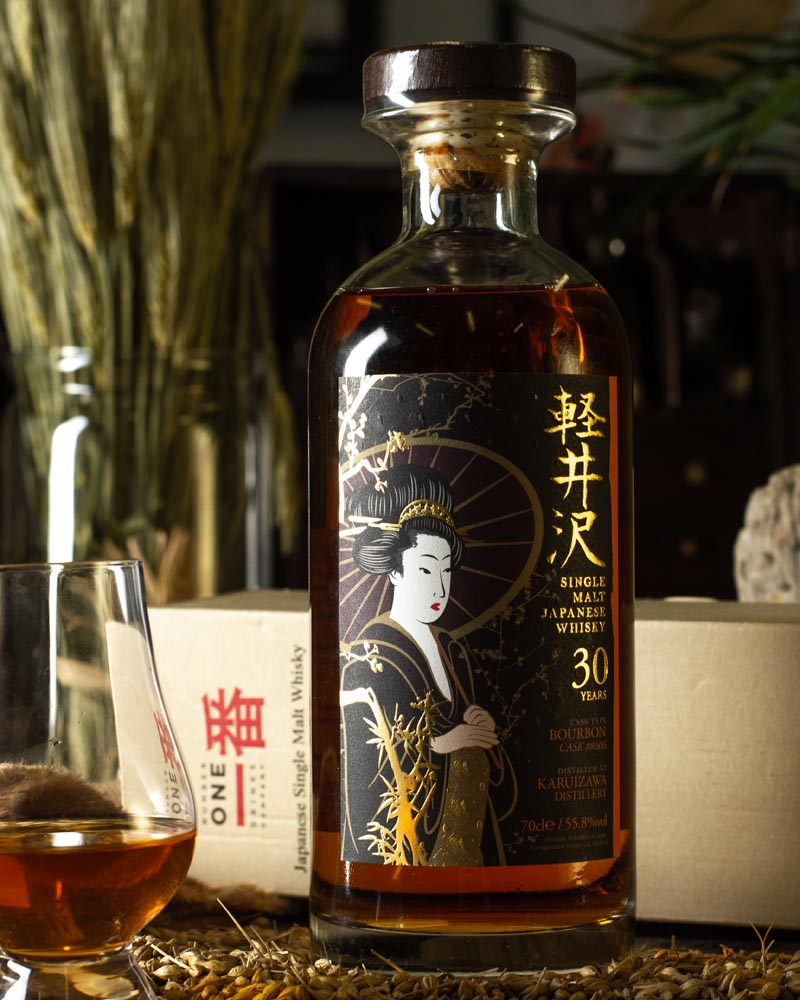 Kariuzawa was initially founded as a winery in 1934 after increased contact with the western world brought numerous wines and spirits to the country. Japanese wine company, Daikoku, built a winery at the foot of the active Mount Asama near the resort town of Karuizawa. The town was well-known by missionaries and visitors from overseas. John Lennon and Yoko Ono are rumoured to have been regular visitors in the 1970s.

The winery ran from 1934 to 1955 when, as the popularity of Japanese whisky within the country began to rise, it was converted into a whisky distillery. The location afforded the perfect amount of humidity and the volcano gifted distilleries with crisp, spring water to use in the production of the whisky. The first spirit was distilled in 1956. The distillery used only Golden Promise barley, and volcanic-filtered water from Mount Asama. The whisky was matured exclusively in sherry casks that lay in an ivy-covered warehouse. At the time, however, nobody could predict was Karuizawa was to become.

In 1962, the distillery was absorbed by the Mercian Corporation. A small-scale distillery in the eyes of its owners, the whisky was to be used in Daikoku’s Ocean blend. It served as a component for the blend and saw intermittent, overlooked single-malt releases. These releases failed to renew the public’s interest in whisky – by this point, the public was lusting after shochu – and the distillery fell silent in 2000. The master distiller at Karuizawa had been at the distillery for more than 50 years when the distillery was mothballed and shed tears at the dismantling of the equipment. Little did he know that Karuizawa would be reborn in ways he could not have possibly imagined. 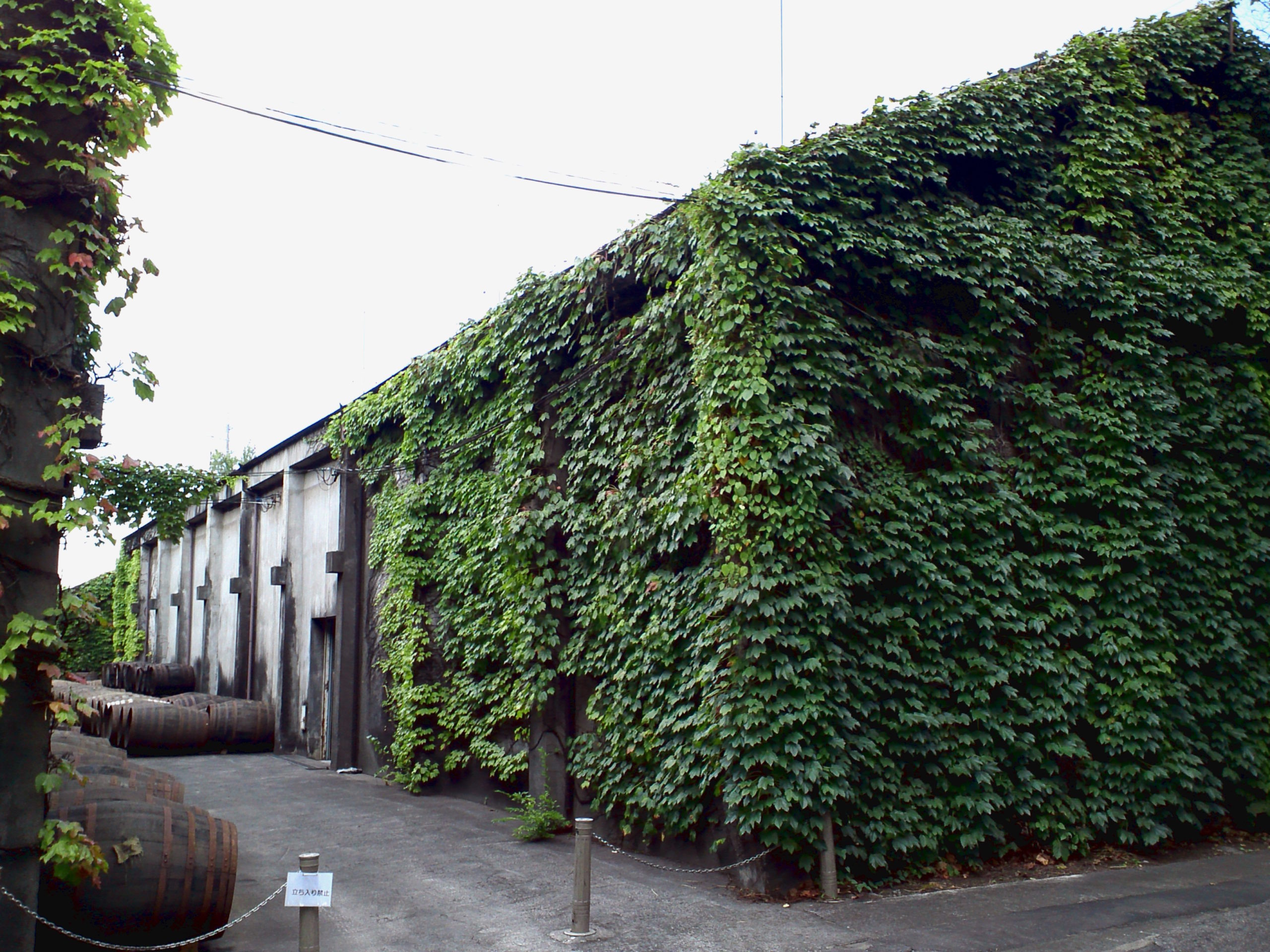 Karuizawa distillery was razed in 2015.

The decision to permanently close Karuizawa was made in 2011, when Kirin, the new owners of the distillery, decided to focus on wine production instead. This turned out to be a mistake on their part, given that bottles of Karuizawa now sell for hundreds of thousands of pounds. Kirin was happy to let the 350 remaining casks be lost to blends. However, there were those who saw the potential in Karuizawa and decided to save the remaining casks from their blended fate.

Marcin Miller and David Croll, founders of Number One Drinks Company, were horrified when they learned that the remaining Karuizawa stocks were to be used in blends, and immediately purchased the entire stock from Kirin. The two had fallen head-over-heels for Karuizawa after trying 69 samples of the older whisky expressions. Previously, Miller and Croll had been disillusioned by the fast-moving, under-matured 12-year-old releases. However, they happened upon something great when they sampled the 30+-year-old casks that were destined to be absorbed into blends. When the two realised that Karuizawa had stopped distilling, they saw an opportunity to bring this rare whisky to the world. 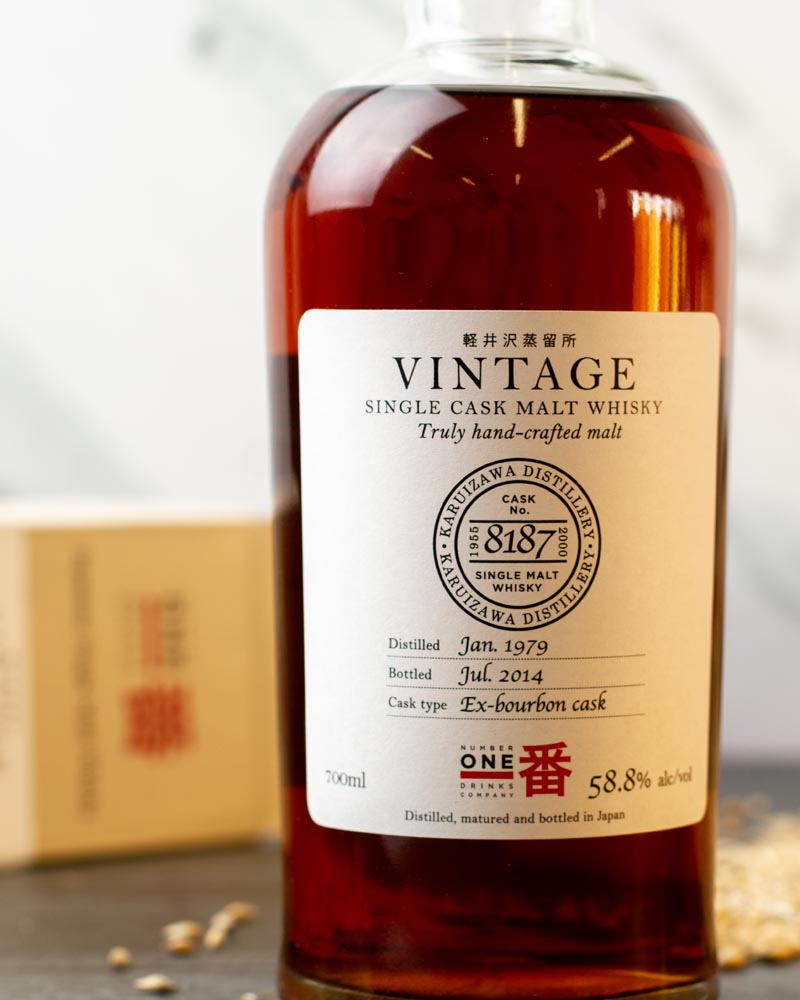 As stocks deplete, prices tend to rise, and Karuizawa was no exception. Only the prices rose at an astonishing rate. Miller attributes this to the age of the Karuizawa whisky.

Likening the whisky to that of cult-favourite Port Ellen in an interview with The Spirit Business, Miller says that “when you open Karuizawa from the 1980s that has been lying in magnificent Sherry butts for thirty years, they’ve taken on such complexity and richness. You wonder are they very slow maturing? Do they work in a very different time scale? That’s the way I look at it.”

The conditions in which Karuizawa matured also played a part in the final product. The temperatures in the Japanese Alps can range from less than 8C in the winter, and more than 25C in the summer. This change in temperature is worlds away from the relatively consistent climate in Scotland. As such, the ABV of Karuizawa remained fairly high due to the angel’s share being lower that one would expect from a Scotch whisky. The result of this is the kind of concentrated, well-rounded flavour that is sought by whisky connoisseurs everywhere.

As such, Karuizawa is now one of the most sought-after Japanese whiskies in the world. Initially, Miller and Croll priced the whisky modestly, to give others a chance to experience Karuizawa for themselves. However, as stocks continued to fall, prices soared.

Number One Drinks then released 41 bottles of Karuizawa 1960 which proved to be the cask that would launch Karuizawa into centre stage of the whisky world.

Subsequently, the remaining casks of Karuizawa were sold to Taiwanese Entrepreneur Eric Huang in 2011. Huang owned 20 of the 25 remaining casks of Karuizawa and had planned to release a final single-cask bottling around the 2020 Olympics which were, of course, cancelled due to the ongoing Covid-19 pandemic. Huang has allegedly chosen to go ahead with the release though as yet we can find no record of the bottles.

In November 2020 Huang was due to release 211 limited edition bottles of Karuizawa 50 year old The Last Masterpiece Single Malt Cask No. 6017 through his online retailer Decanter. The bottles will retail at approximately £35,000 each for a 70cl bottle. The bottles will not be available in the US. Watch this space for more news surrounding The Last Masterpiece – a fitting tribute to Huang’s last cask of Karuizawa.

Huang has cleverly bought, bottled, marketed, and sold much of the remaining stock of Karuizawa. If you would like to get your hands on a bottle, the cheapest bottle on The Whisky Exchange is a no-age-statement Karuizawa Spirit of Asama. This bottle will set you back £2,000. We also have a selection of Karuizawa available on the Mark Littler shop.

And so, Karuizawa began as a modest distillery that in its lifetime was not recognised as a giant of the Japanese whisky world. Only in death has it achieved notoriety.

As stocks deplete, Karuizawa whisky does not fade as its legacy lives on in the renewed interest in Japanese whisky and the staggering prices that bottles fetch at auction and on the secondary market. Other distilleries in Japan (and the rest of the world) dream of becoming as sought-after as Karuizawa. Perhaps some of them will.

2020 saw Karuizawa break records in the whisky industry by fetching a staggering price at auction. The 52-year-old Cask #5627 Zodiac Rat 1960 fetched £363,000 at auction at Sotheby’s in March of this year. The bottle smashed its pre-sale estimates, fetching more than double what was expected. The sale solidifies Karuizawa’s status as a luxury Japanese whisky. Below I have listed some of the most expensive bottles of Karuizawa ever sold. Prices are set to rise as Karuizawa stocks fall. So, if you would like to own a bottle now may be the time to buy.

The top three most expensive Karuizawa bottles sold on Dram Data are:

The top three most expensive Karuizawa bottles sold on Whisky Auctioneer are:

The top three most expensive Karuizawa bottles sold on Whisky Stats are:

Geisha: The Gem in Karuizawa’s Crown 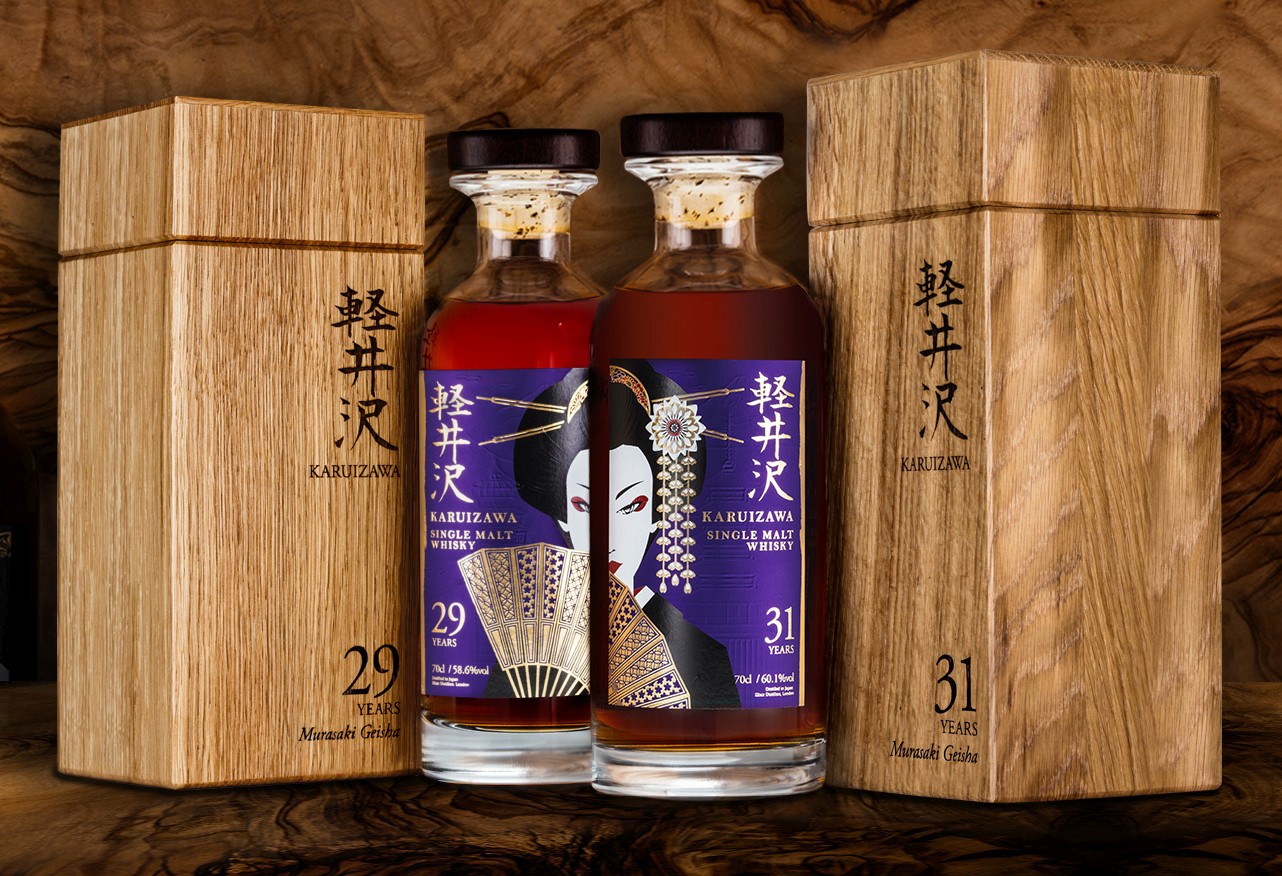 Geisha is a popular and treasured series of Karuizawa whiskies. The series was created to celebrate the artistry of the geisha – female Japanese entertainers that perform traditional Japanese art forms such as dancing and singing. They are often misunderstood, as was Karuizawa before its boom in popularity, and so this series is Karuizawa’s way of celebrating the underappreciated. The series is very popular, with bottles of Pearl Geisha selling for upwards of £27,000. The Whisky Exchange have to date bottled five instalments in the Geisha series. Most recently, Murasaki and Sapphire Geishas.

Only 60 bottles of each expression are available, and so The Whisky Exchange allocated the whisky by ballot. Both 70cl bottles were available for £6,000 each.

In 2020, The Whisky Exchange released another two Karuizawa Geishas. This time, a 31-year-old and 36-year-old known as The Sapphire Geishas. The bottles contain two single-cask expressions, released in the year of Karuizawa’s Sapphire Jubilee. These bottles “pay tribute to [Karuizawa’s]  continuing legend, not to mention its place in our hearts”.

Other Geishas in the collection include Pearl, Emerald, and Golden.

The Whisky Exchange is committed to celebrating Karuizawa’s rarity and beauty, and their Geisha series does just that.

In 2017, Le Clos launched the worlds’s only complete Geisha collection. Made up of 27 bottles, the collection features single malts that were aged for 29, 30, 31, and 50 years, and all bottled between 1970 and 1990. The collection is a huge triumph for Le Clos who pride themselves on sourcing and selling rare and unique whiskies to their customers. The collection retailed for around $300,000.

It is due to these releases, both new and old, that Geisha is one of the most sought-after collections fo Karuizawa, and are exciting and rare assets for whisky collectors all over the globe.

Online Japanese whisky retailer Dekanta have an astonishing collection of Karuizawa, including some Geishas. Head on over to their website to browse their enviable selection, and read all about the rare Japanese whisky that they are bringing to whisky drinkers.