Hibiki, in Japanese, means “resonance” or “echo” referring to the harmonising whiskies within the blended whisky. Produced by Suntory using whiskies from Yamazaki, Hakushu, and Chita, Hibiki blended whisky is revered around the world and championed as a staple of Japanese whisky. 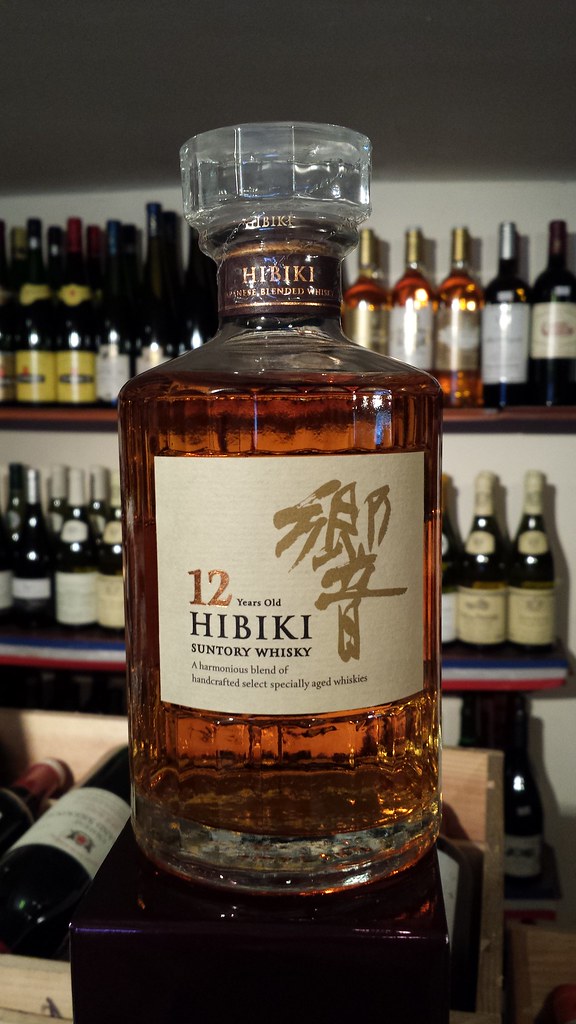 The Hibiki brand was founded in 1989 by Suntory to celebrate the company’s 90th anniversary.. Initially, both expressions in the range had age statements – 17 and 21 years. In 1997 another expression was released with the age statement 30 years, followed by a 12-year old in 2009.

Conventionally, blended whiskies that are given age-statements must display the statement of the youngest whisky in the blend. Therefore, the Hibiki 17-year-old could contain older whiskies, such as a 25-year-old, although this would not be stated on the bottle.

In 2015, a new expression called Japanese Harmony was released. This expression does not carry an age statement.

Hibiki whiskies are said to contain at least 10 different malt and grain whiskies from Yamazaki, Hakushu, and Chita. Many of these whiskies were aged in different types of cask with varying age statements. Each whisky that is included in the blend is tasted by Suntory’s Master Blender, to ensure that each whisky in Hibiki is of a high enough standard.

The brand is now owned by Beam Suntory, the American subsidiary of Suntory, after Suntory purchased Beam Inc. in 2014.

As of today, there are only three different Hibiki expressions available. The 17-year-old, the 21-year-old, and Japanese Harmony. The 12-year-old and 30-year old have, sadly, been discontinued. In 2018, rumours started to circulate that the beloved Hibiki 17-year-old was to be discontinued. However, as of 2020, the whisky still remains available on Suntory’s website.

When rumours began to swirl that the Hibiki 17-year-old was going to be discontinued, prices of Hibiki began to rise. The recent crisis in Japanese whisky has only seen the prices hold steady. Below is a list of the most expensive bottles of Hibiki whisky sold at auction.

The top three most expensive Hibiki bottles sold on Dram Data are:

The top three most expensive Hibiki bottles sold on Whisky Auctioneer are:

The top three most expensive Hibiki bottles sold on Whisky Stats are:

The Mysterious Case of The Hibiki 17-year-old

Of the whiskies in the Hibiki range, the 17-year-old is the most popular and the most beloved. It was a relatively affordable bottle that provided rich and round flavour. And so, when Suntory announced its plans to discontinue the 17-year-old in 2018, hearts broke and prices exploded. Suntory said that they did not have enough 17-year-old spirit to guarantee continued production.

According to Wine-Searcher, searches for the 17-year-old on their website soared with the expression peaking at number 16 on the website’s search rankings upon the announcement of discontinuation. The average price of the 17-year-old doubled. It seemed that whisky lovers everywhere were scrambling to get their hands on a bottle.

Adding to the mystery surrounding this bottle is the fact that availability seems to have been rising steadily over the two years since the announcement. Master of Malt, Amazon,  The Whisky Exchange, and The Whisky Shop all have bottles available. Seems strange for a bottle that was said to be fading out of existence.

Japanese whisky lovers around the world are still holding their breath just in case the Hibiki 17-year-old suddenly disappears out of production. Watch this space for news on the fate of the famed Hibiki 17-year-old.