Akkeshi Distillery is still in its infancy, having only started distilling in 2016, but the distillery is working extremely hard to produce unique whisky at its location in the north of Japan. The distillery sits near to the sea in the town of Akkeshi on the island of Hokkaido. The proximity to the sea means that the whisky takes on a salty, briny character. 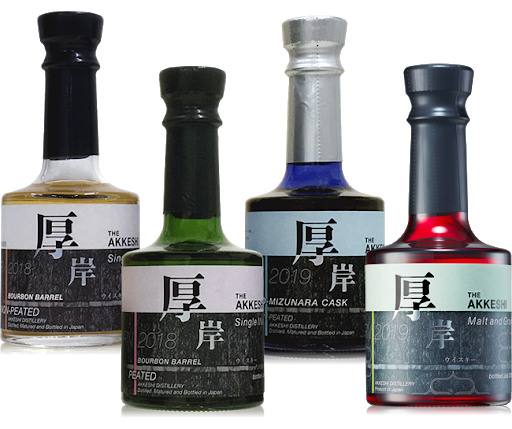 In 2013 Akkeshi purchased batches of raw spirits from two other Japanese distillery in order to age-test them. Construction on the distillery began in 2015. The process was complicated due to the fact that the land beneath the distillery is weak soil with a layer of peat underneath. When the distillery was built production began. The warehouse quickly filled up, and so a second warehouse was built to house Akkeshi’s stocks.

During my research I was only able to find 20cl Akkeshi bottles sold on Dram Data and Whisky Auctioneer due to the fact that the Foundations series was only released on 20cl measures. Hopefully Akkeshi will release more sizeable bottles in the future.

The top three most expensive Akkeshi bottles sold on Dram Data are:

The top three most expensive Akkeshi bottles sold on Whisky Auctioneer are:

As a very new distillery Akkeshi have only had the chance to release very young spirit. However, this spirit gives a tantalising taste of what we can expect from Akkeshi in the future. On their website, Akkeshi recommend trying a dram of their “Foundations” series neat or with water, or even poured over a raw oyster. The town of Akkeshi is famed for its oysters and the distillery promises a wonderful taste experience when combining fresh oysters and a drop of Akkeshi New Born.

The New Born “Foundations” bottlings are already quite difficult to find. Check out Dekanta for some of the limited bottlings. If you are lucky enough to purchase a bottle then you will know exactly what kind of great things we will see from Akkeshi. Alternatively, you can wait to find out!