Port Ellen Distillery To Be Restored 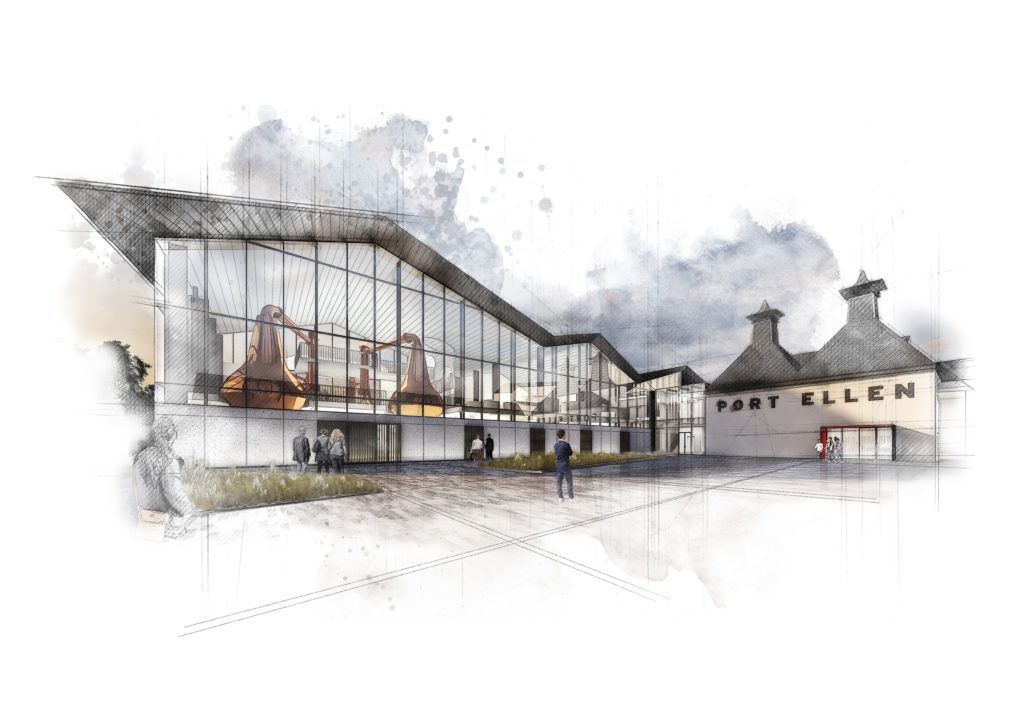 An artist’s impression of what Port Ellen will look like.

In a landmark decision for the Scotch whisky industry, Diageo has been given the go-ahead by Argyll & Bute councillors to rebuild and reopen the famed Port Ellen distillery on Islay. Port Ellen has become even more famed since its mothballing and closure in 1983. However, in 2017 Diageo revealed plans to rebuild Port Ellen and Brora distilleries. Subject to construction, the sites could be operational by the end of this year.

As part of the renovation, there will be new, state-of-the-art production buildings constructed as well as the remaining historic buildings being restored. The local community are reportedly thrilled with the investment; the reopening of the historic distillery has been a dream of the community for a long time.

The whisky distilling process will be a mix of old and new. There will be two pairs of copper still pots under one roof, and two separate distilling regimes. The first of these regimes will focus primarily on recreating the original taste and aroma of Port Ellen whisky. This will be achieved by using exact replicas of the copper stills that were originally used in distilling at Port Ellen. A smaller pair of stills will produce new and exciting expressions that will give Port Ellen distillery a new lease of life. This approach pays tribute to one of the most innovative distillers of the 19th century, John Ramsay, who owned Port Ellen in the time that it was developing a profile in the industry.

Port Ellen was closed and demolished in the 1930s, and partly rebuilt in the 1960s. It was most recently closed in 1983, and very few of the original buildings remain. The original warehouses will be revived and will be a welcome addition to the stunning Islay coastline.

The History of Port Ellen

Port Ellen is located on the south coast of Islay and was opened in 1824 after being built by Alexander Mackay on the site of a malt mill. In 1836 the lease for the distillery was taken over by John Ramsay.

Ramsay, although very young at 21-years-old when he took over the lease, was a visionary. He became the business partner of the owner of Islay, Walter Frederick Campbell. The two started the bi-weekly ferry between Islay and Glasgow, making Port Ellen the island’s main ferry port, and whisky-making the island’s main business.

In 1869, the sales of Port Ellen were handed to W.P. Lowrie, the blender and broker who had a close working relationship with James Buchanan. At this time Port Ellen had already started to export whisky to the United States.

In 1973 new malting drums were built to service Diageo’s three Islay distilleries: Port Ellen, Caol Ila, and Lagavulin. The distillery was hit hard by a sharp decline in demand in the 80s. Smoky single malt drinkers were rare and single malts were rarely being considered for blends. The result was that Port Ellen closed for good in 1983.

Subsequent to its closure, prices for Port Ellen whisky have skyrocketed.

In 2017 Diageo announced plans to invest £30 million in rebuilding and reopening Port Ellen and Brora distillery. Subject to construction, the sites could be finished by the end of this year.

The History Of Diageo Learning From Whisky Cask Scams: What You Need To Do To Stay Safe