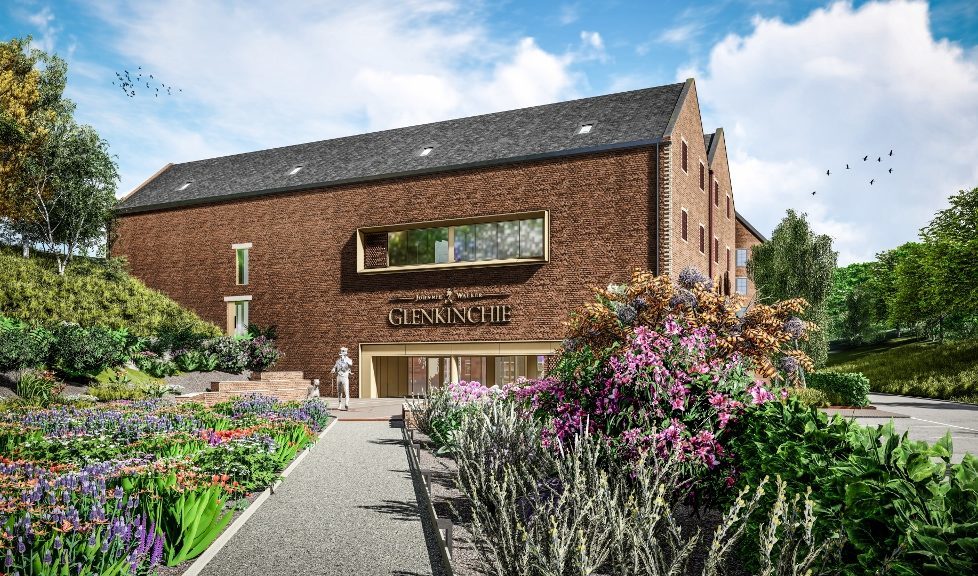 An artist’s impression of what Glenkinchie will look like. Courtesy of Diageo.

Glenkinchie is located in the Scottish Lowlands and was founded by the Rate Brothers. The brothers started their whisky distilling venture in 1825 when they opened Milton distillery nearby. The name suggested what many suspected at the time, that anyone running a mill (hence Milton) was probably running an illicit whisky on the side. In the long years since whisky distilling became legal, Glenkinchie has sat near the Milton site and garnered a reputation for mid-palate fragrant whisky.

Glenkinchie’s owners, Diageo, have recently announced a £150 million refurbishment plan for each of the four distilleries that contribute to Diageo’s Johnnie Walker blended whisky. Glenkinchie distillery currently consists of Victorian-era red brick but under new plans will be transformed into a multi-level visitors centre that will bring visitors in for a cultural and educational experience. The new plans also include a welcome lounge, a new bar, retail unit, and a cocktail making classroom.

In addition to these changes, the scale-model of the distillery that was originally created in 1925 for the Empire Exhibition will be revamped with digital and interactive storytelling elements that will tell the tale of Glenkinchie’s success. A number of new buildings will be put up on the site and the gardens landscaped to compliment the new visitors centre.

The project is part of Diageo’s plan to create a Johnnie Walker tour of Scotland, with Glenkinchie, Clynelish, Cardhu, and Caol Ila representing each of the distilleries that contribute to the Johnnie Walker blend. Glenkinchie’s relationship with Johnnie Walker goes back 125 years.

The History of Glenkinchie

Milton distillery opened in 1825, with the name Milton suggesting that what operated on the site was a mill and not an illicit distillery.

Glenkinchie operated under the name Milton when it was founded in 1825, but changed its name to Glenkinchie in 1837 after the owners, the Rate brothers, built a more substantial distillery. The name Glenkinchie comes from the Kinchie Burn, originally owned by the de Quincey family. The red brick building that was built in that era is the same building that sits at the site today, although not for long.

In 1853 they were bankrupted and the site was converted into a sawmill. In 1881 whisky-making recommenced after a group of Edinburgh-based investors saw the potential in the site as the blended whisky market grew. It was rebuilt and expanded to its current form in 1890.

The distillery’s maltings remained open until 1968. They have since turned into a museum which houses the scale-model of the distillery that was made in 1925.

It was not until 1998 when Glenkinchie had its time as a single malt after Diageo selected one of Glenkinchie’s whiskies to feature in their Classic Malts Selection. Glenkinchie has grown in popularity since then and now commands a renovation along with Caol Ila, Clynelish, and Cardhu.