Brora Distillery To Be Restored 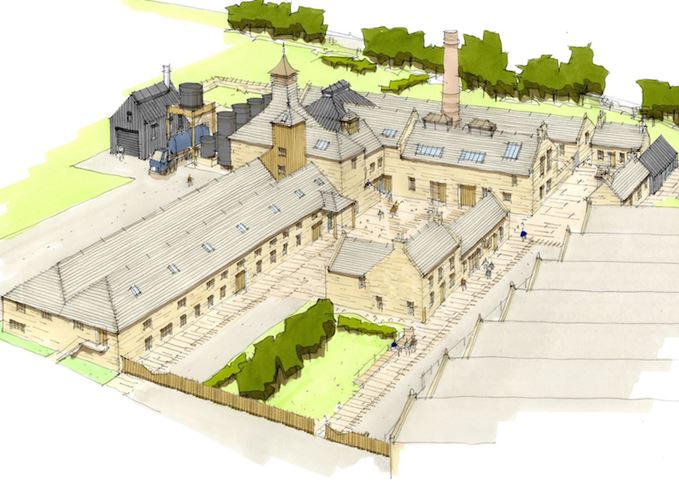 An artist’s impression of what Brora will look like.

Brora has become a cult whisky since the distillery’s closure in 1983, and news of its reopening is more than welcome. Industry giants, Diageo have had their £30 million plans to renovate and reopen both Port Ellen and Brora approved.

Many of Brora’s original buildings will remain on the site, with the addition of a new still house to house Brora’s two stills. These stills are the two that sat in the distillery at the time of its closure. They have been sent to Alloa to be refurbished so that they may be reused in the distillery’s revival. It is incredibly lucky that the stills are in a good enough position to be refurbished for reuse and adds a sense of nostalgia to the stills.

The use of these stills is due to the fact that Brora aims to distil the same style of whisky that was produced at the distillery prior to its closure. Detailed records kept by Diageo in its distilling days will help the distillers of today to reproduce the famed whisky.

The transportation of the stills for refurbishment marked a huge milestone in the revival of the distillery. Subject to construction, the site should be up and running by the end of 2020.

Brora was originally named Clynelish when it opened in 1819, but the name was changed to Brora in the 70s when today’s Clynelish distillery was opened on the same site.

Since Brora’s closure in 1983, the whisky has become more and more popular, and also more expensive due to its cult status. The production of Brora whisky once more will be a welcome addition to the Highland region, allowing people who cannot currently afford a cask of Brora the chance to try their new whisky in the future.

The History of Brora

Once known as Clynelish, Brora Distillery is one of the Clearance Distilleries of Scotland, constructed by the Marquis of Stafford in 1819 The people who ended up in the new Brora settlement worked in one of the Duke’s business enterprises, and one of these was whisky distilling.

It took the Brora Distillery some time to become established, and it passed through several lessees until finally, George Lawson took over operations. Between him and his sons, the plant would stay in the Lawson family’s hands until 1896 when James Ainslie, a Glasgow blender, purchased it. In 1912, Ainslie went bankrupt and DCL and Risk took shares in the company, with John Walker and Sons following suit in 1916. In 1925, Risk was bought out and Walker joined DCL with DCL taking over the control of the distillery in 1930, taking full responsibility for its operations until the time that it closed.

Following World War II, the Brora Distillery increased its capacity considerably due to an increased demand for blends among a number of major whisky producers. By the time 1967 had rolled around, its popularity had become so great that it was decided that a new bigger distillery should be constructed next to the original buildings. Although the old distillery shut for a year, its doors reopened in 1969 with production being recommenced in the same year.

While the name of the distillery was originally Clynelish, its name had to be changed to Brora in 1975 following a legislation change which banned any two distilleries from having the same name, and during the period 1972-74 heavily peated malt was produced here while the Caol Ila distillery was undergoing a rebuild. However, the majority of the whisky made here after 1973 was a lightly peated Highland variety.

The distillery did not always operate at full capacity during the period between 1969 and the time that it closed, and it finally shut down for good in 1983. Although rumours persisted about the possibility of the Brora Distillery reopening, these proved to be unfounded until October of 2017 when plans were revealed to reopen the distillery. Assuming planning permission is granted, the site is due to reopen and begin operations again by 2020.

Collecting Taxidermy & Rowland Ward The Romance Of The Cask Part 4: Warehouses, finishing & the end of the line