The History of Macallan: Everything You Need to Know 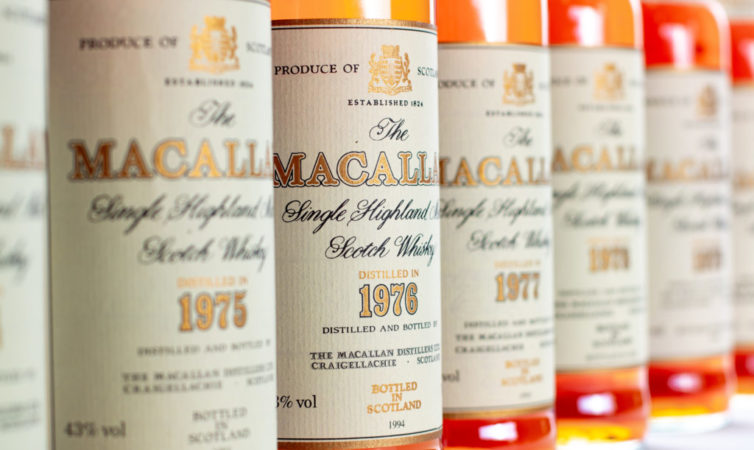 Macallan is one of the most highly regarded whiskies in the world. The Macallan brand boasts an unparalleled reputation for both the quality of its whisky and the high prices which rare and collectable Macallan bottlings fetch at auction. Although traditionally used as a contributor malt for blends including The Famous Grouse, the Macallan distillery has become synonymous with the growth of the single malt whisky market. In the 1980s, faced with the ‘Whisky Loch’ and downturn in the blended malt market Macallan’s focus shifted to the emerging demand for single malts. When first creating a distinctive single malt style, Macallan’s oily and creamy rich malt was initially exclusively matured in ex-sherry casks, which impart an oaky, spicy sherried fruit character. In recent years Macallan has placed greater emphasis on the luxury whisky market with limited bottlings including a Fine & Rare vintage range dating back to 1926, and the Masters of Photography series. Macallan’s limited edition and vintage releases are highly sought amongst collectors and investors, appreciating in value and collectability over the years as Macallan’s iconic reputation continually evolves.

Located in Scotland’s Speyside region in close proximity to the river Spey, Macallan was first licenced to Alexander Reid in 1824 as the Elchies distillery. Originally one of Speyside’s farm distilleries, an illicit distillery is believed to have operated at the Macallan site from the 1700s. Macallan would become one of the first legally licenced distilleries in Scotland after the passage of the 1823 Excise Act. Alexander Reid’s Elchies distillery was modest in size, only two stills operating from a wooden shed. Following Reid’s death in 1847, the licence was taken over by James Shearer Priest and James Davidson.

In 1868, James Stuart acquired the Elchies lease and rebuilt the distillery. Despite this the future Macallan would have the shortest entry in the Victorian writer and distilling historian Alfred Barnard’s book, The Whisky Distilleries of the United Kingdom. Barnard described the Elchies distillery as an “old fashioned” establishment, “similar to other Speyside distilleries”. James Stuart sold Elchies in 1892, to Roderick Kemp who had previously owned and successfully expanded the Talisker distillery. Recognising Elchies’ potential Kemp would modernise the site and increase malt production, but would also rename the distillery as Macallan-Glenlivet (although the Glenlivet suffix would be dropped in 1980). 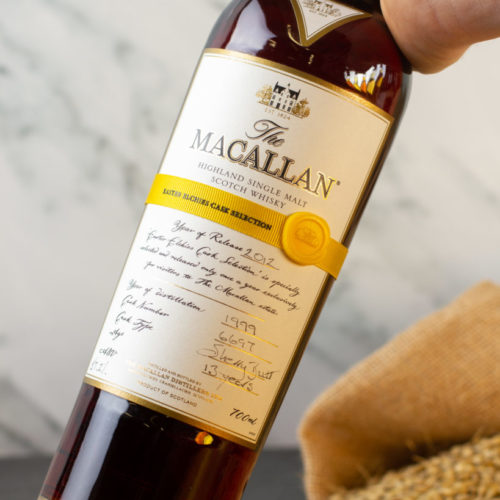 After Kemp’s death in 1909, the Roderick Kemp Trust was established to secure the family’s future ownership of Macallan. From the 1950s onward the Macallan distillery has been continually expanded, increasing to five stills in 1954 and then more significantly in 1965 when a new stillhouse doubled the number of stills from six to twelve. This expansion continued throughout the 1970s as Macallan’s stills increased to eighteen in 1974, with the total number of stills reaching twenty-one in 1975. Macallan’s growth was down to increasing demand, as Macallan had become a sought-after malt for blends including The Famous Grouse.

The stills are at the core of Macallan’s individuality and whisky character. Macallan’s stills are small, less than 4 metres (13 feet) high with a capacity of only 3900 litres each. The compact size significantly contributes to Macallan’s malt style, as in small stills there is less contact between vapour and copper which results in the production of a heavier oily and rich spirit. Macallan’s popularity as a blending malt during the blended whisky boom of the 1960s-1970s would see the Roderick Kemp Trust reformed as a private limited company in 1966, with the company including the Macallan distillery floated on the London Stock Exchange in 1968. 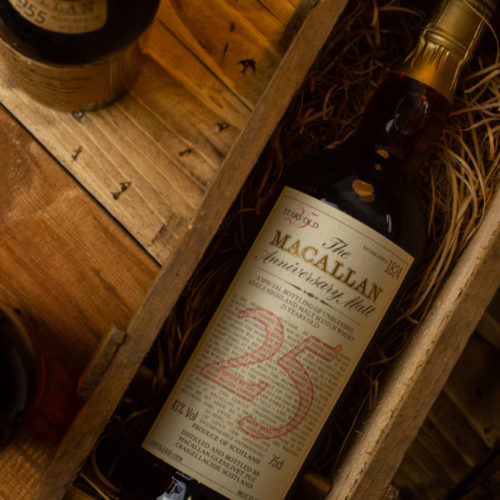 Macallan: The Birth of the Single Malt Market

Faced with a declining blended whisky market and a surplus of maturing stock in the early 1980s ‘Whisky Loch’, Macallan opted to focus on the emerging single malt market. The second stillhouse would be mothballed as existing stocks were used to release the first official Macallan single malt bottling, an 18-Year-Old expression matured in ex-sherry casks launched in 1984. In 1986, the Japanese brewery and distilling group Suntory purchased 25% of Macallan stocks. The remaining 75% of stocks would be purchased by Highland Distillers in 1996, a takeover which ended the Kemp family’s ownership of Macallan.

The Macallan farm adjoining the distillery would be restored and resume barley production in 1998, growing Golden Promise barley a Scottish variety of which cultivation had drastically diminished. Macallan’s character traditionally began with Golden Promise, as the barley produced nutty, oily, silky flavours when used in distilling. Until 1994, Macallan used only Golden Promise for distillation before reduced harvests necessitated combining barley varieties for distillation. While the Macallan farm only produces a token amount of barley in relation to Macallan’s distilling requirements, harvests of estate grown barley have been used to distill malt used for Macallan’s limited edition and luxury bottlings. 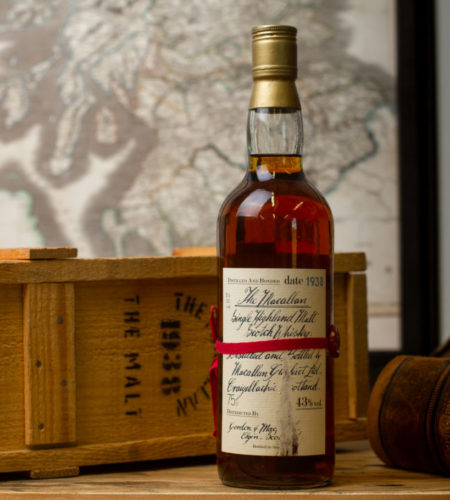 The 1887 Company, a partnership between Edrington and William Grant & Sons purchased Highland Distillers for £601 million in 1999. Edrington would become the major stakeholder in Macallan, alongside minority shareholders William Grant & Sons and Suntory. Edrington has continued to promote Macallan’s growth as a single malt brand opening a visitors’ centre in 2001, and positioning Macallan at the forefront of the growing luxury and collectable whisky market. Since Macallan’s first single malt release in 1984 ex-sherry casks had been used exclusively for maturation, although under Edrington’s direction Macallan would become the first distillery to create ‘bespoke’ casks. The ‘bespoke’ cask regime saw Macallan select specific trees (primarily European oak), to create casks coopered to Macallan’s specifications in Jerez Spain and seasoned with Oloroso sherry. The Sherry Oak maturation became Macallan’s unique selling point, with Macallan building additional warehouses at the distillery to store to specially created casks.

In 2004, Macallan expanded its single malt range launching the Fine Oak series introducing a variety of American oak and ex-bourbon casks for maturation, creating a lighter and sweeter malt character attracting new whisky drinkers. Macallan’s popularity and increasing demand saw the mothballed second Macallan stillhouse reopen and resume production in 2009. Alongside the core single malt range Macallan regularly releases a variety of vintage expressions and limited editions attracting attention from whisky enthusiasts, collectors and investors. Edrington has marketed Macallan to the luxury whisky market with bottlings of 50–60-year-old Macallan in Lalique crystal decanters, and the ‘Fine & Rare’ collection comprised of vintage expressions dating from 1926 to 1989. Limited edition Macallan releases have featured innovative collaborations with artists and designers, such as the ‘Masters of Photography’ series which combines exclusive bottlings with unique photographic items from leading photographers including Rankin and Albert Watson. 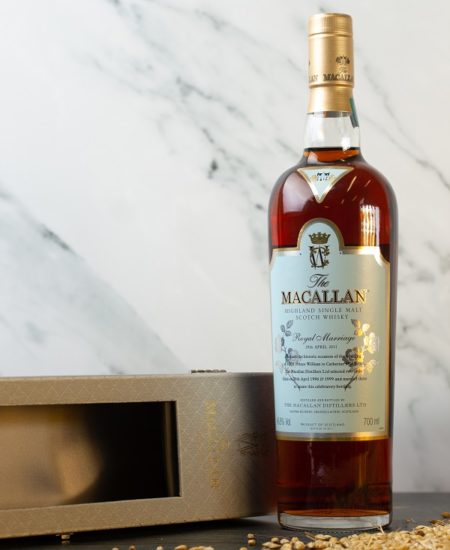 In 2013, Edrington announced that a completely new, £100 million distillery and visitors’ centre would be built at the Macallan site. The new Macallan distillery featuring a distinctive subterranean design was commissioned on the 9th November 2017, and officially opened in May 2018 at a final cost of £140 million. In an innovative feat of engineering Macallan’s roof is a giant puzzle held together by precision, covered with grass and wildflowers designed to camouflage Macallan into the Speyside landscape. Macallan’s new distillery has a total of 36 stills with a capacity of 15 million litres of alcohol a year, a continues Macallan’s traditional method of whisky production using small stills. In 2019, a new core range expression Macallan Estate was released, made with barley grown at the Macallan estate the bottling celebrated Macallan’s distilling heritage. The old Macallan distillery, with its 21 stills and a capacity of 11 million litres has been mothballed for the foreseeable future provoking rumours it might one day be repurposed and resume production.