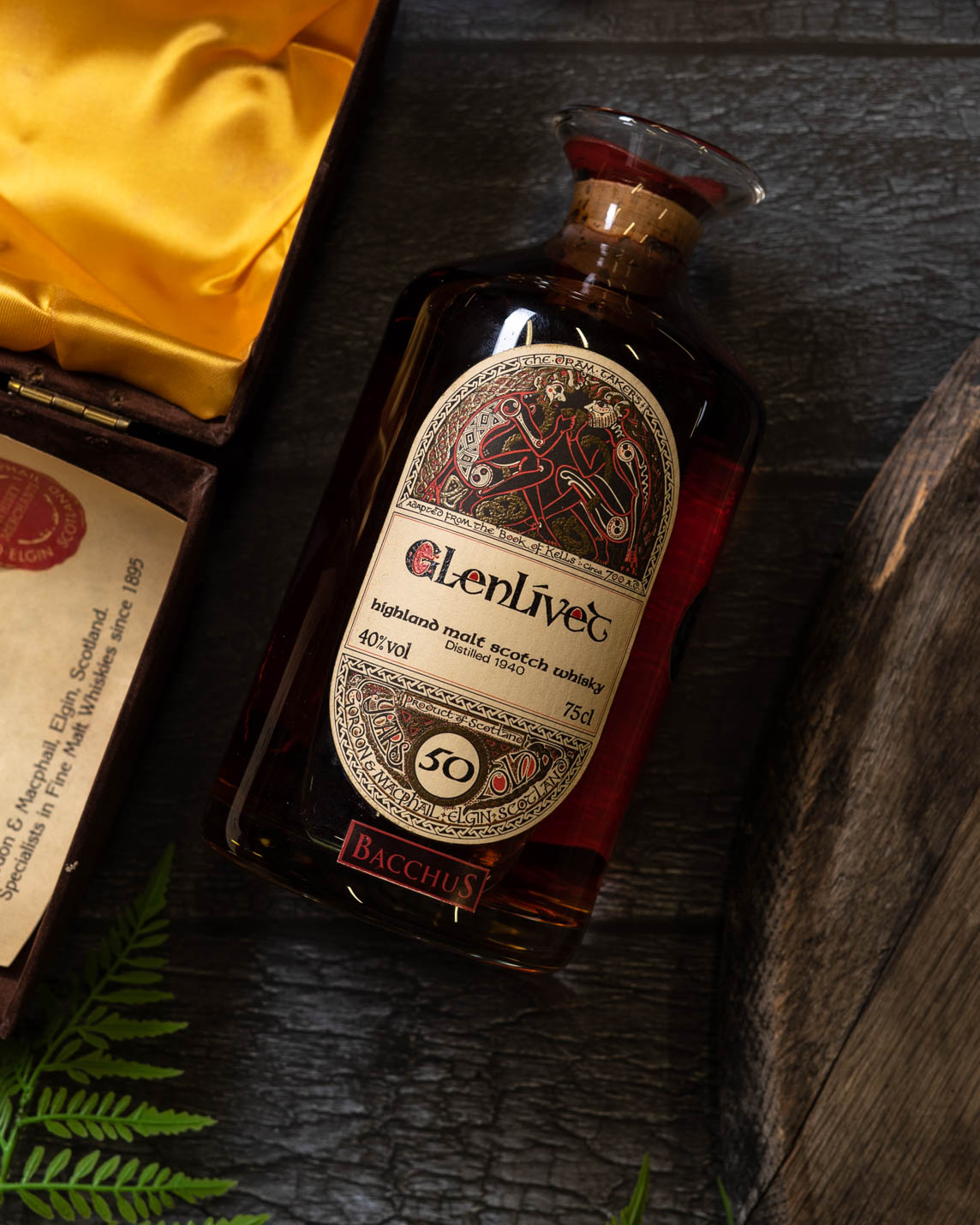 Welcome to the fantastic Glenlivet 1940 50 Year Old Book of Kells.

The Glenlivet 1940 is the second oldest vintage in Gordon & Macphail’s Book of Kells series and this stunning whisky was left to mature for five decades before being bottled in 1990. Let’s take a look at what makes this bottle of whisky so special…

Of Times Gone By

This Glenlivet Book of Kells was distilled in 1940, 81 years ago! At the time, the world was at war and the laying of these casks was an incredible feat of foresight.

Over the five decades of the 20th century that this cask was maturing, the world was drastically changing. The Cold War was both started and formally ended, twelve UK prime ministers took residence in Number 10, and man landed on the moon six times. This Glenlivet is a relic of history and it emerged in the 1990s to a very different world.

The Book of Kells Series

The series is often also referred to as The Dram Takers bottlings as the illustration on the label, whilst in the style of the illuminated manuscript, depicts two characters drinking a dram together.

The Book of Kells bottlings began in the 1980s and it appears that a Speyside 1938 45 year old whisky that was bottled in 1983 was among the first. However, that bottle is not the oldest vintage in the series; that accolade goes to the Mortlach 1936 50 Year Old whisky. To put this into perspective, in 1936 King Edward VII took the throne of the United Kingdom, construction of the Hoover Dam was finished, and the first ever television coverage of an international sports event took place with the summer Olympics in Berlin. This whisky was left to mature for 50 years and bottled in 1986, the same year as the Voyager 2 probe made its first encounter with Uranus and the first 3D printer was sold.

The Book of Kells series has become one of Gordon & MacPhail’s most famous bottle series as it contains some of the oldest and rarest whiskies available and there are bottlings from many different distilleries. This includes:

Gordon & MacPhail is an independent bottler based in Elgin, Scotland. It grew from a grocery business that was established in 1895 by James Gordon and John Alexander MacPhail. Gordon & MacPhail has become famous for its collection of old and rare casks that have been used to produce some of the most iconic bottling series in the industry. These include, amongst others, the Connoisseur’s Choice series, the Generations series, and of course the Book of Kells series which we are taking a closer look at here in this article.

In 1915, John Urquhart took control of Gordon & MacPhail, working alongside his son George.It was Urquhart that championed the bottling of whisky from prized distilleries under special licenses. The Urquhart family has gone on to manage Gordon & MacPhail for four generations, the last of the family to join being Fiona Vine, John Urquhart’s great granddaughter, who took on the role of Procurement Manager in 2019.

The Urquhart family, and John Urquhart in particular, are the ones to credit for having the forethought and willpower to leave a large number of casks to mature for a long period of time, allowing the iconic series that we know today.

Gordon & MacPhail are continuing to release high age statement whisky like they have with the Book of Kells bottles, and most recently they have auctioned a record breaking 80 year old Glenlivet.

Own A Piece of Scottish History

There is no denying that this Glenlivet is a relic of whisky history.  It has been overlooked for many years but it should be time that changed.

Maybe the next chapter of its life will be as part of your collection?  If you would like more information please feel free to contact us on [email protected] or call 01260 218718

This website uses cookies to improve your experience while you navigate through the website. Out of these cookies, the cookies that are categorized as necessary are stored on your browser as they are as essential for the working of basic functionalities of the website. We also use third-party cookies that help us analyze and understand how you use this website. These cookies will be stored in your browser only with your consent. You also have the option to opt-out of these cookies. But opting out of some of these cookies may have an effect on your browsing experience.
Necessary Always Enabled
Necessary cookies are absolutely essential for the website to function properly. This category only includes cookies that ensures basic functionalities and security features of the website. These cookies do not store any personal information.
Non-necessary
Any cookies that may not be particularly necessary for the website to function and is used specifically to collect user personal data via analytics, ads, other embedded contents are termed as non-necessary cookies. It is mandatory to procure user consent prior to running these cookies on your website.
SAVE & ACCEPT
<link rel='stylesheet' id='brb-public-main-css-css' href='https://www.marklittler.com/wp-content/plugins/business-reviews-bundle/assets/css/public-main.css?