What Affects The Price Of Cadenhead Whisky

Selling Cadenhead whisky can seem like a daunting prospect. After all, there are so many ways that you can sell whisky. But which way is the most effective? And, how can you get the best price for your whisky? Well, that is where we come in.

At Mark Littler Ltd we can help you to sell your Cadenhead whisky quickly, stress-free, and for the best price. We make selling whisky online easy with Mark Littler Ltd. 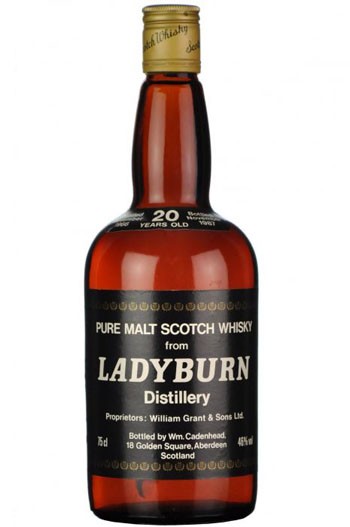 The Dumpy series has arguably one of the most diverse designs in the Cadenhead collection with over 300 different labels recorded, however it is rumoured that there are up to 400 types in existence. The Dumpy is famed for its black label with bold white font, bordered by either white or gold Scottish thistles.

Traditionally bottles have a gold screw cap with a smaller label that sits at the bottle neck. The larger label outlines the owner at time of production, the location (Netherkirkgate, Campbelltown, Aberdeen etc.)  the volume and proof. The Dumpy was originally bottled at 46% ABV, except during 1989-1991 when they were produced a Cask Strength.

The 150th Anniversary collection was produced in 1992 to commemorate the 150th anniversary of the opening of the Cadenhead distillery in Netherkirkgate. They formed part of the Authentic Collection, started in 1991, which consisted of a selection of incredibly rare irish whiskies from closed distilleries across the country.

They are presented in traditional 70cl bottles with a stopper cork, sealed with the usual Cadenhead gold. Labels are in their trademark black design with white font, flanked with the thistle illustration. Following two years bottling the Authentic Collection at 46%, in the 1990s Cadenhead began to favour the Cask Strength bottling. 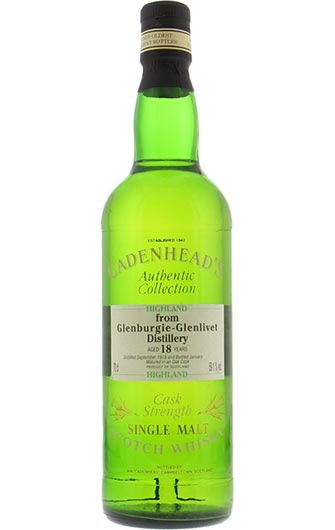 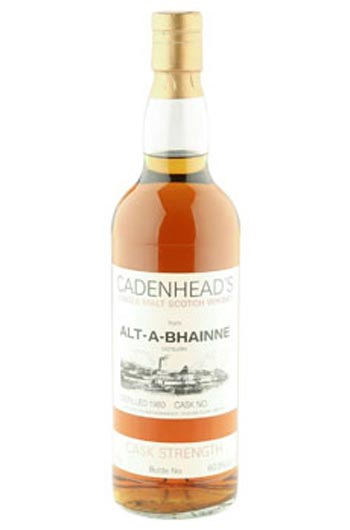 In contrast to the Authentic Collection, the Cask Strength series chose not to include the usual details, such as age, month of distillation and bottling date. Instead they opted to add the cask number. This decision makes the Cask Strength bottles unique within the Cadenhead brand.

Another discerning feature of the Cask Strength bottles are the labels, diverging from the traditional black background with gold font, these bottles are designed with a white label including a black and white illustration of the Cadenhead distillery and includes a black and red font. It does however retain the gold foiled stopper cork. Interestingly there was a mistake made in the printing of the Allt-a-Bhainne labels, in which the second ‘L’ was missed from ‘Allt’, which makes these bottles particularly remarkable.

The vast majority of Cask Strength bottles date from the mid-nineties with proofs ranging between the 55-65% ABV.

Discover The Price Of Your Cadenhead Whisky With Mark Littler Ltd

The Six Factors That Affect The Price Of Cadenhead Whisky

There are six factors that will affect the price of your bottle of Cadenhead. These are the age of the whisky, the bottling date, the vintage, whether it is a single cask edition, the level of the whisky and the condition of the label and box.

How We Can Help Sell Your Cadenhead Whisky

What is the price of your Cadenhead whisky?

The History Of Cadenhead

Cadenhead was first established by George Duncan in 1842, at 47 Netherkirkgate in Aberdeen, making it the oldest of Scotland’s independent bottlers. He was joined almost 10 years later by his brother-in-law William Cadenhead.

Following Duncan’s death in 1858 William Cadenhead took ownership of the business and changed its name to William Cadenhead Limited. Although there is little documented about the life of George Duncan, Cadenhead was well known as both a vintner and a poet; he ran the company until his death in 1904, at which time he was succeeded by his nephew Robert W. Duthie.

It was under Duthie that the company became most famous for independent whisky bottling. It was Duthie who started to vat malt varieties for blends rather than just singles. As a result, branded whiskies like Putachieside and Heilanman were born and the slogan ‘By Test the Best’ was used in advertising for the company on concert programmes, buses and the curtains at theatres.

Unfortunately, Duthie was hit by a tram whilst en route to a meeting with his bank manager; given that he had no family, following his death Cadenhead passed to his sisters. The sisters had little knowledge of the company but shared a desire to keep it running, thus they appointed long-term Cadenhead employee Ann Oliver to manage the business.

Oliver was known for her eccentricities; she refused to move with the times, which led the company into some trouble and left them with a warehouse bursting with whisky gunnels of no discernible value. To help clear their debts, they held a Christies fire sale of the collection from which they made millions

When Oliver retired, J & A. Mitchell took over the business and moved operations from Netherkirkgate to Campbeltown. Nowadays, in addition to the high-end, non-coloured and non-chill-filtered single malts, Cadenhead has tasting rooms and shops in Edinburgh and London.