In October 2018 the world of rare whisky was thrust firmly into the limelight as the world record for the most expensive bottle of whisky was broken, for the third time in 6 months. The £1.2 million bottle of Macallan marked what many whisky experts at the time were expecting – the peak in the market.

Except, twelve months later that record was broken again, by another bottle of Macallan 1926, which was sold £1.5 million at Sotheby’s. So what is going on 12 months after the ‘peak’ of rare whisky?

The rise of rare whisky

In 2017 the record price for a bottle of whisky sold at auction in the UK was ‘only’ £95,000. That was for a 65-year-old bottle of Dalmore. Less than 12 months later in May 2018 that record would be smashed seven times over as a limited-edition (1 of 12) bottle of Macallan 1926 with a label designed by Peter Blake sold for more than £750,000. Then in October 2018 two more bottle of Macallan 1926 arrived at auction. In early October the record price was set at nearly £850,000 for a 1926 with a Valerio Adami design, a record that was held for less than a month as a one-off Macallan 1926, with a hand painted bottle by Michael Dillon sold for £1.2 million. This price was heralded as ‘peak whisky’, and the markets initially seemed to agree, yet the record stood for just 12 months before another bottle of 1926 came to the market.

The reason behind it seemed simple; everyone wanted a piece of the boom and so more and more bottles started to appear on the market. As the rare whisky market is largely driven by exclusivity and rarity, the more bottles of a certain type that appear, the less value they hold to collectors. Also when the high value collector already has their bottle, it falls to the next highest bidder to drive the prices, and without the competition of the highest value collector they reach more modest prices.

In the more moderate part of the market – where bottles are worth ‘merely’ hundreds or thousands of pounds – we saw a similar slowing down. The slowing in this area of the market has been gentler (between 4-25%), possibly because there are more collectors at this price bracket. There was then somewhat of a plateau through summer 2019 with bottles seeming to hold their value once again. Before another peak appeared in autumn 2019 that cumulated with another record breaking sale.

What is going on with the whisky market in 2019?

There are a couple of factors to consider here. The first is the bottle of 1926 Macallan. In our opinion that is probably the result of a collector looking to complete their collection of 1926 bottles; there are four different bottle styles for that series, and because all the other bottles had been on the market in the last 12 months we think it is likely a collector was looking for a final bottle to complete their collection. They were perhaps bidding against someone else seriously interested in the bottle and this has driven the price to record levels.

The second thing to consider is the political and economical situation at the end of 2019. While Brexit might have been once again postponed the impacts are still being felt in terms of the strength of other currencies against the pound. Collectors and drinkers can get more pound for their money and therefore more whisky for their hard earned cash.

Finally there was the threat of tariffs caused by the possibility of a no deal Brexit. In the case of a no deal Brexit it was possible that there may have been a ‘whisky drought’ in mainland Europe as bottles became stuck at country borders and large tariffs were automatically placed on alcohol moving from the UK to the EU. This may have caused drinkers and collectors in the more moderate section of the market to rush to get their dream bottles while the threat of a no deal Brexit was still real.

We expect that all of the above might be part contributors as to why we have seen spikes in prices in recent months that contradict ‘peak whisky’ being in 2018. However the likely politically and economic contributions to this second peak means that these prices might not be stable long term. 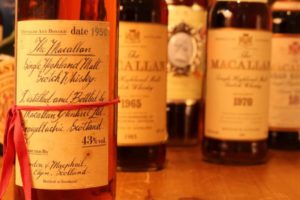 Bottles of Macallan continue to be sought after by collectors 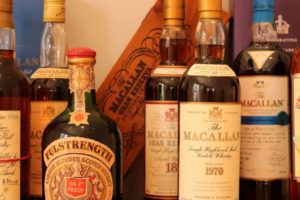 Unusual bottles and rare vintages are particularly sought after

Is it the right time to sell your whisky?

As with the selling of all investments it is necessary to read the market and make a decision based on your particular bottle. We still think that the true peak whisky was in 2018 but the spikes in values we are seeing as 2019 comes to a close cannot be discounted.

With the political uncertainly of Brexit once again postponed and the general weakness of the pound the UK auction market is still attractive to overseas buyers. Certainly if you have a one-off or very limited edition bottle of something it can be argued for bringing it to auction before similar bottles are released – rarity almost always drives a good price in the rare whisky world – as long as it is correctly marketed.

5 things to look for when selling your single malt whisky bottle?

If you have a bottle of single malt whisky that you are looking to sell then please get in touch for a free valuation. Mark Littler have a network of international buyers and can help you achieve the best price for your bottle either via private sale or at auction.

Simply fill in form below and we will post your 52 page guide to get you started on your whisky adventure.

How many bottles of whisky are in a cask? How to sell a cask of Macallan?