A Complete Guide to the Vintage Rolex Explorer

Read all about the Rolex Explorer, including the history of the different models and what to look for when valuing your Explorer.

The History of the Rolex Explorer

The Rolex Explorer first came into fruition to meet the needs of Rolex’s more adventurous customer. They had succeeded in creating a tough and sturdy watch in the bubble-back and Rolex now looked to market it to the mountaineering world.

The first prototypes of the Explorer appeared in 1952 without a name; they were essentially bubble-backs with different dials and either steel or brass hands. The unnamed watches were sent out on a variety of expeditions and adventures to test their muster. A prototype Explorer made it up Mount Everest, on the wrist of Sir John Hunt, and there was speculation as to whether Tenzig Norgay made Rolex the first watch to reach the summit. However, Hillary has since revealed that he touched the summit before Norgay, and had in fact worn a Smiths watch.

Nevertheless, these intrepid expeditions were a good test of the prototype’s stamina, and an equally good marketing platform for what would become a core model in Rolex’s sport watches. 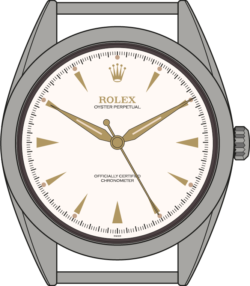 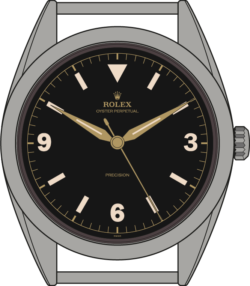 Model 6098 was the prototype release of the Explorer, this was the edition that made the famous journey up Everest. It had a 20mm rivetted bracelet, with an A296 movement. This model had the familiar bubble-back and the crystal had a slight dome. The hands were brass and the dial white, with the Rolex logo in gold and the text ‘officially certified chronometer’ beneath the hands. Instead of the usual triangle mark at the 12 o’clock position there was a gold version of the Rolex crown.

In 1953 the 6098 was renumbered as the 6298; it was the first to feature the Quarter Arabic Explorer-type dial. At this stage it did not feature the name ‘Explorer’ and instead of Rolex’s go-to ‘Officially Certified Chronometer’, it instead reads ‘Precision’. It has been suggested that this type of dial was also fitted to watches on Hunt’s successful 1953 Everest expedition. 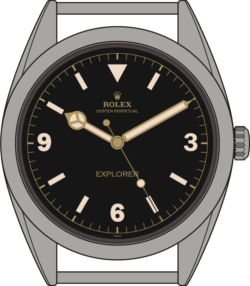 The Rolex 6150 was the fist of the Explorer models to upgrade to the Mercedes hands; on earlier versions of these hands you will notice a point at the tip of the minute hand. This model was first unveiled by Rolex in 1953, before being rebranded later in the year to the 6350; it was at this point that the watch was first named as the Explorer, a name that was then printed on the dial beneath the hands.

Another version of the 6350 was available with a textured ‘honeycomb’ dial which was available on all Explorer models at this time. Later versions of the 6350 was produced with Rolex’s original pencil hands. The crown has a small plus symbol beneath the Rolex logo and on the dial of the later versions the name Explorer is written above the hands – underneath the logo. These versions also say ‘Officially Chronometer Certified’ at the bottom of the dial. 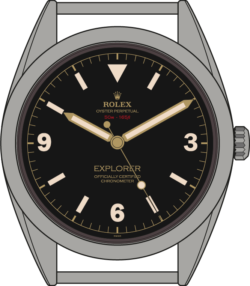 The 6610 was the fourth release of the Explorer model, launched in 1955. Initial versions had some of the text printed in red – a depth rating of 50m – with the name Explorer printed in gold beneath the hands, above the chronometer certification. Some versions of the 6610 had a slightly different seconds hand, with the white luminous circle, approximately halfway down. Another defining feature of the 6610, is its use of the 1030 movement. Additionally, the crown had a small minus sign below the Rolex logo.

The second edition of 6610 saw the model name move upwards to sit between depth rating and the Rolex logo. It was at this point that all sports editions began to upgrade to the Mercedes hands. By the third edition the depth rating was removed from the dial entirely and the seconds hand was painted white; this was adopted in all sports models of the time. These models were also available with the honeycomb dial, the 6610 was the last of the Explorers to offer this option. 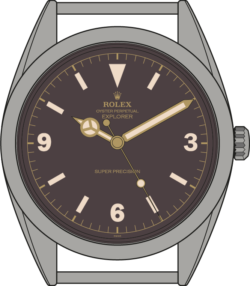 In the late ‘50s the 5500 was introduced to the Explorer market, with a 1530 movement it had previously been known as the Air-King. The Air-King had a much smaller case than the Explorer and had a slightly smaller bracelet (19mm rather than the standard 20mm) and the first edition 5500 share these traits. The dial was gloss black, and instead of the chronometer certification these watches either had the word ‘Precision’ or ‘Super precision’ on the dial – this depended on the movement that was used and the date of production. Super precision Air King models are highly collectable in the vintage market, due to their rarity.

Later in the 1960s, the penultimate release of the 5500 saw the introduction of the T<25 text at 6o’clock to show the type of luminescence included in the paint. As a result of this they also included the white line seen on some Submariners, which helped printers to properly line up the text on the dial.

One final version of the 5500 was released in the early 1970s, Rolex reverted to using just the word ‘Precision’ where previously both ‘Precision’ and ‘Super Precision’ had been used. This model was available with either a rivetted or a folded Oyster bracelet. 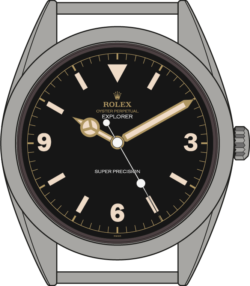 The 5504 was launched in 1957 and used the same case as the 6610, with a white second hand and ‘Super Precision’ in white text beneath the hands. The minute markers were slightly longer, and the dial is gloss black. This model had the standard 20mm rivetted bracelet and has a 1530 calibre movement. 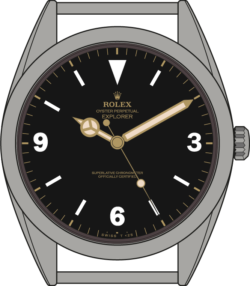 The 1016 was first introduced in 1959, this release saw the minute marks move to the edge of the dial. This was the first edition to be marked ‘Superlative Chronometer Officially Certified’ and the addition of the Swiss T<25 to the bottom of the dial. Some early versions of the 1016 had a gloss black dial; these are highly collectable and well sought after in the vintage market.

The second edition of the Explorer 1016 watch had an all-white dial and the logo adopted a new font: slab-serif. Released in the early ‘60s it had a 1570 movement and a 20mm rivetted construction.

There was also an edition of the 1016 that was named the Space-Dweller, launched in 1963. This was a commemorative edition, released to celebrate NASA astronauts making a visit to Japan as part of the Mercury Space Program. These were a limited-edition release that never made it to the world market; this makes the Space-Dweller extremely rare and collectable, as so few are in circulation very few have ever been seen. A Space-Dweller with provenance would be worth over £30,000.

The third edition sees Rolex written in serif font and an upgrade to the 1570 movement, and on the fourth edition there was an alteration to the size of the crown image in the Rolex logo. The following release, in the 1980s saw an upgrade of the Mercedes hands, which were now longer, with a white circle on the seconds hand; due to the increased length of the hands, they then overhung the minute markers – making it easier to read. A final release of the 1016 appeared in the late ‘80s when it was given a flatter lens profile. 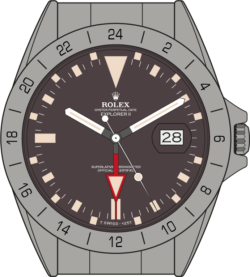 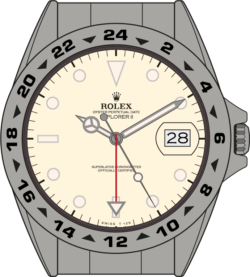 The 1655 was named the Explorer II model, launched in 1971. This was a more modern take on the Explorer, which was sportier than its predecessors; with 24-hour bezel a square crown guard, a date wheel and cyclops through which to view it. This watch had a 1575 movement and a 20mm bracelet.

A unique feature of the Explorer II was the addition of a fourth hand – in red – which marked the 24-hour time. A second version of this watch was introduced a few years later in which the second hand had a small luminous circle. A further edition included an updated bezel with larger numbers; some of these were released with a 1570 movement and there are some that also include the ‘T Swiss – <25 T’ marking to indicate the luminosity of the paint used. The final edition of the Explorer 1655 saw it upgrade to the new serif font from the slab-serif and the alteration to the larger rounded Rolex crown logo.

A subsequent version of the Explorer II was released in 1985 but with the model number 16550 and fitted with a synthetic-sapphire crystal. This version was available with an ivory-coloured or black dial. The white dial is considerably more collectable than the than the black because the white has a distinctive fade in the paint that makes it appear ivory in tone which collectors find attractive.

Earlier productions of the Explorer 16550 also have white gold hands and white gold circles surrounding the hour markers. The 24-hour hand became considerably narrower – a red strip with a small white triangle at the tip – giving it a slicker look. The numbers on the bezel also had a new, bolder font and small triangles between the figures, rather than lines on the previous models.

The Explorer is another iconic series from Rolex that is collectable and holds value well. We hope we have helped you discover more about your vintage Explorer watch. If you are looking to sell or value your watch please get in contact by emailing [email protected]

Is it Worth Buying a Cask of Whisky? A Complete Guide to the Rolex GMT-Master

A Complete Guide to the Rolex Datejust

A Complete Guide to the Rolex President or Day-Date

A Complete Guide to the Rolex Air-King